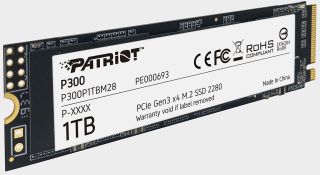 Most people would agree that the SSD was the best thing to happen to PC hardware in the last decade, and in the last year or so, the bang-for-buck factor has gotten a lot better. These days you can find a 1TB SSD selling for around $100. As such, I was surprised to see Patriot attach a $164.99 MSRP to its new 1TB P300 SSD. Fortunately, street pricing is more in line with the competition.

Patriot is billing its P300 series as being designed to offer "all-around performance for desktop and laptop users." That's to say, it's not aiming to set any benchmark records. It wouldn't be able to—these are PCI Express 3.0 drives with relatively tame speed ratings. Have a look:

There's nothing wrong with that—these speeds are on par with Crucial's P1, one of the best SSDs for gaming. However, Patriot's MSRPs are out of whack. Here's a look:

On the MSRP side, they're priced like higher performing SSDs. For example, Western Digital's 1TB SN750 is rated to hit 3,470MBs/ for sequential reads and 3,000MB/s for sequential writes, and is available for $149.99 on Newegg right now. Street pricing is far more palatable, and hopefully it stays that way.

Patriot has only announced the 256GB, 512GB, and 1TB models, though its online store and product pages both list the 128GB and 2TB capacities. They should be available soon. All of these drives are backed by a 3-year warranty.