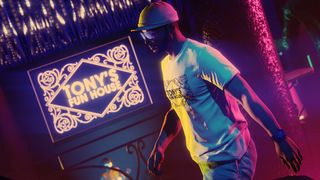 GTA's After Hours update—possibly one of its last major additions in the near future, given that Red Dead Redemption 2 finally lands on consoles in October—adds nightclubs to the game. They're all in the Los Santos city area, and after you purchase one, you can hire a DJ, get drunk and dance your ass off. You also get the chance to meet The Ballad of Gay Tony's Tony Prince again (and to a lesser extent, Lazlow).

Samuel's spent about six or so hours with the update so far, while Joe spent his one hour with it dancing to Solomun's set. Here are some first impressions.

Above: Samuel and Joe dancing in the former's club.

Samuel: The price of the clubs seems pretty reasonable to me. If you're a lapsed GTA player, and you just fancy owning one so you and your friends can party down, it'll set you aside just over a million for the cheapest one ($1,080,000 to be exact), which I don't think is too bad given how many free money promotions Rockstar has been running this year. Naturally, you can outfit it with lights, security guards and extra vehicle storage areas for a lot more cash. The most you can pay for one total is apparently over $5 million. But you can spend a lot less to have a decent club—a few hundred thousand more than the basic fee gets you nicer decor and decent lighting. To set up your club, you just need to steal some equipment from a festival and pick up the DJ, two separate missions. At that point, the Club is up and running. It doesn't take long.

Joe: When I heard Samuel had purchased After Hours’ cheapest club—located on Elysian Island—I vouched for the $1.4 million Mission Row venue. I’d planned to a) rub it in his face and b) compare and contrast what throwing an extra 500K at the business might get me. But the joke’s on me, it seems, because besides location (I’m right round the corner from Legion Square; Sam is down by the docks), our clubs appear to be identical, despite our choice of decor and cosmetics. It’s worth noting that I’ve hardly scratched the surface of the update, and that going all in at, say, West Vinewood might yield different results—but, given you can centralise your other businesses from your nightclub, location seems less important.

Samuel: It's disappointing you can't name the clubs. Like how my motorcycle club is called 'Motorcycle Club', I'm disappointed I can't call mine 'Night Club'. It also costs money to use any name but 'Omega'. The environments themselves are nice, lavish and busy with NPCs, though—even the most barebones clubs look good. I can't afford podium dancers or TV screens, but I consider these to be garish touches, and I'm (allegedly) running a classy establishment.

Joe: Yeah, I was a little underwhelmed when we poked around a rando's venue, only to find the layout was the same as both of our own—each located elsewhere. Worse still, the bouncers wouldn't let us access its private areas. And they charged us $25 each to get in, the swines!

But I must admit: I'm really digging After Hours' music. I set aside an hour last night to dig into the update's missions. But instead I picked up Solomun and spent half an hour tuned into his set, jiving on my pretend club's pretend dance floor while nodding my real head to the beat in real life. I like my techno, mind you, but I can't wait to see the other incoming acts and check out this new radio station that’s due next week.

Samuel: My main gripe is that managing a club feels like a matter of maintenance, rather than feeling like you're building something. Your nightclub starts successful—and you have to grind promotion missions to stop its popularity bar from dropping.

I'd almost rather it started empty, and gradually built up from completing these missions. Instead I feel slightly anxious that the bar is ticking down when I'm not there. You can upgrade your staff, who keep the meter from dropping as quickly, but that costs $475,000.

Samuel: The more businesses you own, the more you can link them to your nightclub. I only own two businesses (a cargo hangar and a weed farm), but both now accumulate supplies passively through my nightclub. I can assign technicians to each one, and each additional technician costs more money. It seems like the supplies tick up pretty slowly, but then you don't have to do any supply missions before making a delivery—Reddit user jdhyrberg did the maths on that here. I recommend this After Hours megathread if you're interested in the minutiae of moneymaking in After Hours.

As mentioned, the promotion missions are the main content in After Hours, and that's how I've spent most of my time with GTA Online since the update. Your club can make up to $10k per in-game day, but that's only if you keep the popularity meter up. This takes the form of several mission types, none of which I enjoyed all that much, and each of which pay little. You can play them by yourself, though, and they don't take long to finish in most cases.

You're tasked with smashing up the cars of rival developers, playing loud music from a promo blimp over busy venues, picking up patrons to come back to the club, putting up posters and dropping flyers from the sky. After finishing ten of them, more types have appeared: first fetching a celebrity to come to the club by stealing a police vehicle, then another which involves destroying supply trucks. They feel rather like busywork.

None of them are particularly enjoyable versus the better set piece-y missions in GTA's Smuggler's Run expansion. I like getting the $7-10K a day that my nightclub makes, but I don't wanna be chained to the place, running these dull missions just to keep that tiny amount of background money from shrinking. I wish the challenges were a bigger break from the GTA norm given the choice of theme.

More interesting is gatecrashing other people's promotion missions, which can also affect your club's popularity. I had an all-time great GTA moment today, disrupting this music-playing airship by throwing remote charges onto the vessel from my flying car. This is pretty much the last form of attack you would anticipate from the sky.

Naturally, when similar things happened to me, I was furious. Such is life in GTA's public servers. There are also business battles in After Hours, where you can fight rival groups for supplies in the open world.

Samuel: To accompany the nightclubs, dancing is now a minigame, and it's kind of fun. The many button prompts on the screen above perfectly capture the level to which I overthink the act of dancing in public.

Joe: I’ve holidayed in Ibiza nine times and spent most of my formative (and occasionally current) years of partying in Glasgow nightclubs. Of After Hours’ superstar lineup, I’ve seen all but Dixon live and I unashamedly love techno music. As noted above, I spent a good half hour dancing away—in-game and in-person—to Solomun’s set last night, and the update’s soundtrack should be incredible.

The dance animations contained within the update’s sort-of minigame are cool, but I think they become less realistic the more effort you put in. Clicking through each level, indicated by a prompt at the right-hand side of the screen, progressively brings your avatar to life—to the point where your limbs are everywhere and you look a wee bit like Phoebe from Friends that time she goes jogging in the park. Dancing in After Hours is most realistic, and most fun, when dialled down. Keep it minimal, just like the music.

Samuel: I, meanwhile, have spent my adult life avoiding nightclubs, but this Solomun guy seems to know some fresh tunes (people still say fresh, right?). I like having a new hangout space in GTA Online, too, and I'll always fondly recall the time we awkwardly danced with each other, Joe.