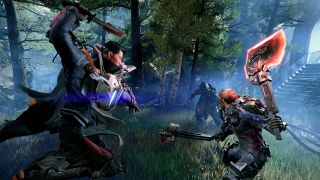 The Surge may not have made the top of our list ranking the best Souls-like games, but Deck13's sci-fi take on the formula did rank higher than their previous attempt, Lords of the Fallen. Here's hoping they can continue to improve in the sequel, The Surge 2, which is due out this year.

Deck13 Interactive have released new screenshots of The Surge 2, and the outdoor environments some of them show could go a long way toward livening it up. The first game was so blandly industrial that in my review I said it looked like an explosion at the factory factory, and anything to change that would be a plus. Some of the new character designs have a very Destiny quality to them, with fantasy flourishes and a fair bit of glow.