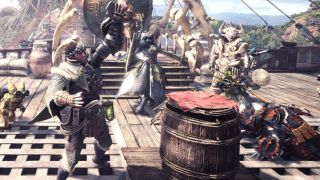 Monster Hunter: World has a story and dozens of monsters to slaughter, but after a point you have to start setting your own objectives to get the most out of the game. Those objectives are often armor builds. By combining armor pieces with skills that fit your fighting style, you stand to deal damage to monsters a lot faster. Some of the toughest monsters require you to craft armor that resists their favorite element.

Alternatively, you might just want to look awesome when you're on the hunt with friends. When you hit high rank you can start customizing colors, and there is a massive range of armor bits to mix and match—five in each set, to be precise.

To help your efforts, and because it can be a pain to navigate Monster Hunter: World's crafting menus, we've taken pictures of all the armor sets we've unlocked so far. There are a bunch more to discover deeper into high rank, but we've found a considerable chunk of them. There are a few that you only unlock in the crafting menu when you pick up specific objects, so look out for sinister cloth and Mosswine pigs on your travels. They unlock some pretty weird sets.

At High Rank armor sets come in two versions—alpha and beta. Alpha sets have more build-in armor skills, but beta sets have slots for decorations, which lets you customise the armor's skills. Decorations are the best way to fine-tune a set to min-max perfection if you want to play the numbers for your character, but for casual hunting with friends you can't go too wrong with either variety.

In the pictures the alpha set is on the left, and the beta set is on the right. Most of them are just palette swaps, but a few have extra detailing to set them apart.