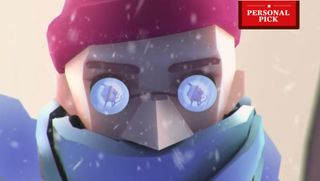 You've got to suspend friendships to play certain games. Street Fighter can generate lasting resentments when players fail to temporarily turn off friend-mode, fume about whatever cheap-ass bullshit their momentary non-friend has put up, and then reactivate friendly relations once their scrub rage has passed. As a teenager, I stormed out of a friend's house over such a case of Street Fighter 2 bullshit.

Project Winter is much more insidious. It isn't cheesy move spamming that hurts you, it's the lies. Among your group of eight survivors—and I highly recommend playing with people you know—two are traitors. As a survivor, not only do you have to avoid being killed or set back by the traitors, you have to survive a frigid, moose and bear-infested wilderness, which is hard enough without liars among you.

It's another attempt at bringing the basic concept of party game Werewolf—you may know it by its Mafia variant—into a multiplayer videogame. It's a tough thing to do. For one, everyone has to play along. It's no fun if the secret traitors just say "haha, I'm a traitor" at the start. And two, the full experience of sitting in a circle trying to suss out liars among your friends can't be replicated in a game, at least until mainstream VR accurately reproduces facial expressions and body language.

Project Winter's adaption succeeds by replacing face-to-face communication with lots of subtle ways for the traitors to hinder the survivors, which also gives the survivors lots of subtle hints as to who the traitors are. The top-down view means that, if you can't see someone on your screen, they can't see you, giving traitors privacy when they want to open special, traitor-only crates that contain weapons, traps, and poisons. But if a survivor stumbles upon an open traitor crate, they may remember who it was that wandered up that way "looking for berries."

Or not. There's a lot to keep track of outside of sussing out rats. The survivors have to first get a power station up and running, which means looting or crafting materials to drop into it. The traitors usually help during this stage to avoid being found out. Meanwhile, hunger and cold are eating at everybody, and there's not much time to dedicate to interrogating your temporary non-friends about their whereabouts and intentions. And when players are cut off from each other—the area voice chat only carries so far—stories begin to conflict.

In one game, as a traitor, I was called out by a survivor who noticed that I'd left valuable resources sitting in a crate instead of shepherding them to the power station. Rather than protest, I simply walked away and found two other survivors who'd gone on an expedition to find the next objective.

When I returned with the two of them, who'd seen or heard none of this, this nosy survivor was still on about how I was probably a traitor. I claimed not to have any idea what he was talking about, and accused him of being a traitor, since clearly I'd been helping these other two while he threw accusations around.

To my surprise, my party backed me up. It worked for a little bit, but I tend to crack under pressure given long enough. I'd make a terrible spy.

More often than not I'm the one being fooled. In one game, while warming up inside the starting cabin with two other players, we heard an argument outside. Two players were shouting toward the cabin that the other was the traitor. One had tried to kill the other. No, it was actually an accident. One had said he was the traitor. No, he was joking. Naturally, the three of us in the cabin figured we were witnessing two traitors trying to throw us off by feigning discord. We banished them, and let them kill each other in the cold.

Of course, I'd been warming up with the two real traitors the whole time. Bastards.

Traitors can sabotage access panels to loot bunkers, drop traps, play sneaky games with walkie-talkies—the only way to communicate over distances—encourage risky treks and then run back to the cabin claiming to have gotten 'lost,' and all sorts of other devious things. The best games see a combination of tricks. The worst see the traitors play it too safe at first, so that they have no choice but to pull out guns late in the game and chase the survivors around. That's still fun, though.

Project Winter is one of the few games where I don't mind spectating if I die early. As a ghost, I can teleport around the map to watch everyone else struggle—sometimes overhearing them wonder if I'm still out there, or if I died, or if I was a traitor. Sometimes I know who one of the traitors is—because she killed me—but can't tell them directly. I can only provide ghostly healing, heat, or damage according to what I think I know, and hope they observe my indirect communication. Watching the remaining survivors struggle while having more information than them makes for excellent drama.

I'm sure there's fun to be had with the right group of strangers, but so far I've only played Project Winter with people I know. The post-game chats ("Oh, that's what happened to you!") are one of the best parts of it—just so long as you're able to reinstate friendship-mode after being poisoned to death by a filthy liar.