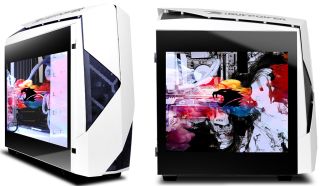 Way back at Computex, iBuyPower caught our attention with Project Snowblind, a system that trades RGB lighting for a transparent LCD side panel. It was only a concept back then and iBuyPower didn't have pricing information to share, but that's no longer the case—iBuyPower is now taking pre-orders for its Snowblind PC starting at $1,499.

We'll get to the system configurations in a moment, but first let's talk a bit about the side panel. It's a transparent and fully customizable LCD panel with a 1280x1024 resolution.

The display connects through DVI on the back of the case to your graphics card and functions as a second monitor. Though it can be used to play games on, iBuyPower recommends against doing so and notes that it was designed specifically for showing off your PC's guts.

Here's a video iBuyPower put together that shows some of the trippy effects that are possible:

If you want to see more, there are a few other videos of the Snowblind PC on iBuyPower's YouTube channel.

iBuyPower's Snowblind Pro upgrades the CPU to a Core i7-7700K, doubles the amount of RAM to 16GB, and adds a 240GB SSD to the mix.

At the top end, the Snowblind Extreme also comes configured with a Core i7-7700K CPU, but trades the motherboard for MSI's Z270 XPower Gaming Titanium, bumps the RAM up to 32GB, swaps out the graphics card for a GeForce GTX 1080, and pairs a 480GB SSD with a 2TB HDD for storage duties.

All three systems can be customized by going here. Orders are expected to ship at the end of February.