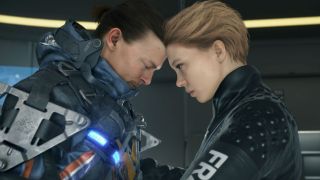 In the latest issue of Famitsu, Kojima Productions' Hideo Kojima and Yoji Shinkawa went on a nostalgic trip through Death Stranding's development, but they also took the time to spitball some ideas and tease the possible direction of the studio now that its first game is out of the way.

Spotted by Dualshockers, Kojima mentioned that he'd be interested in trying his hand at smaller or episodic games, not just time-devouring epics like Death Stranding. Sam's journey across America got its hooks in me deep, so I don't begrudge the 70 hours I spent with it, but I'd love to play through a Kojima Productions game that didn't ask me to put my life on hold.

Kojima's already experimented with this a bit when we got a taste of Phantom Pain via its prologue, Ground Zeroes. The whole thing takes place in a single location, a black site camp in Cuba, over the course of one night. Though much smaller, it hearkened back to the first two Metal Gear Solids and feels like the most pure stealth game of the bunch.

The studio plans to tackle multiple game projects, including another big game, though what shape it will take remains to be seen. Kojima did mention that he'd like to make a game with more mecha, since that's Shinkawa's speciality as an artist. Outside of games, the pair would also like to work on a manga together.

Death Stranding hasn't hit PC yet, but we'll be getting our hands on it soon enough. It's due out this summer.