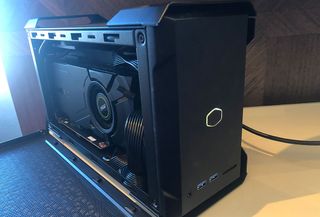 Intel's recently unveiled Ghost Canyon NUC seems to have struck a chord with some of its hardware partners, several of which have announced products specifically designed for the modular gaming PC. One of them is Cooler Master's NC100 small form factor (SFF) case.

In case you missed it, the Ghost Canyon NUC is a fully self-contained PC in its own right, with the option of adding a shortened graphics card inside the comparatively small chassis. It's significantly more powerful than previous generation NUC systems, and is easy to upgrade—you could simply yank out the main portion of the Ghost Canyon NUC containing the CPU, RAM, and storage, and pop in an upgraded module down the line.

As a gaming PC, you'll want to pair the NUC with a discrete GPU. Companies like Asus are stepping to the plate with shortened cards designed to fit inside the NUC, including a pair of factory overclocked Dual GeForce RTX 2070 Mini cards (one of the two models sports a slightly more aggressive overclock).

So far it looks like the 2070 is the fastest available GPU for the Ghost Canyon NUC. That's where Cooler Master's NC100 comes into play. Like Razer's recently announced Tomahawk N1, the NC100 affords users the freedom of using a longer graphics card.

It's a 7.5-liter case, compared to Razer's 10-liter Tomahawk, so, it's a bit more compact. The NC100 also comes with an SFX power supply. According to what a Cooler Master rep told The Tech Buyer's Guru (good find by The Verge), it's a 650W PSU with 80 Plus Gold certification. That's exactly the wattage Nvidia recommends for its GeForce RTX 2080 Ti (which is a 280W GPU).

There's also a special baseboard inside the NC100. This is to allow the Ghost Canyon NUC to communicate with the discrete GPU. Cooler Master says the case with PSU and baseboard will be available at Newegg, CyberPower PC, and other retailers for $199.99 in the second quarter of 2020.