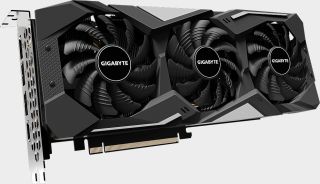 If you have not done so already, I advise reading Jarred's article why AMD's last minute 5600 XT BIOS update feels like a bait and switch of sorts. I'm not going to rehash the entire thing, but it's relevant reading, because those BIOS updates he discusses are now starting to pour in.

The quick summary is this: AMD announced the Radeon RX 5600 XT at CES 2020, then Nvidia dropped the price of the GeForce RTX 2060 to steal AMD's thunder, and this in turn prompted AMD to push out a video BIOS (VBIOS) to its add-in-board (AIB) partners to enable faster GPU and memory clocks.

That's the short version of events. Reviews (including our own review of the 5600 XT), show performance based on the updated clocks with the updated BIOS, as that is what was provided. However, all of the cards that already shipped to retailers still sport the original clocks, and so AIBs have now begun making available updated VBIOS files to end users. To make things easy, here's a roundup of updated 5600 XT VBIOS files that are currently available.

ASRock offers three 5600 XT cards and has made available VBIOS updates for each one. Here they are, along with the faster clocks that get unlocked:

Bear in mind that none of these appear to change the memory speed from 12Gbps to 14Gbps, so you're just looking at a bump in GPU clocks. It's not clear if later models will ship with faster 14Gbps memory.

Gigabyte currently lists two 5600 XT models, the 5600 XT Gaming OC 6G and the 5600 XT Windforce OC 6G. However, there is only one VBIOS update available, and it's for the Gaming OC 6G model.

MSI had made some BIOS updates available, which requires installing its Dragon Center utility (download here). Interestingly, a bump in memory speed is not part of any of the VBIOS updates. Why not? MSI explained the reason in the latest episode of MSI Insider, essentially saying AMD provided memory chips validated to run at 12Gbps. That being the case, it's hit or miss whether a particular card can run the memory at 14Gbps without issue. Some might be able to, others inevitably won't.

This is what Jarred talked about, in that AMD's last minute specs change creates a headache for AIBs, and a confusing situation for consumers. That said, MSI is launching a specific model with 14Gbps memory next month, that being the 5600 XT Gaming Z.

Check out more of what MSI had to say in the video below:

Not all of MSI's 5600 XT cards will receive a VBIOS update. The regular model and Mech version both will not, unless something changes. Meanwhile, the Gaming X, Mech OC, and Gaming Z will. I'm not sure if they're currently available because I don't have any of those cards to test, but if so, they should show up in the Dragon Center software.

The BIOS updates for each one can be found here. However, the updated clocks are not the same. After updating, the Red Devil bumps up speeds across the board, while the Red Dragon only bumps up the game clock in OC mode, and both clocks in silent mode. Have a look:

Both cards already run at 14Gbps for the memory, so there's no change there. As for the regular model, PowerColor has made available a VBIOS update for that one as well, but there's no mention of where the clockspeeds end up. As shipped, it sports a 1,560MHz game clock and 1,620MHz boost clock and 12Gbps memory. The VBIOS update can be found at the same link above.

One aggravating wrinkle to all this—PowerColor's update utility for the Red Dragon and Red Devil models is based on DOS. There's a PDF that outlines how to create bootable DOS media so that users can update the VBIOS. Hello, 1990s!

Last up (in alphabetical order) is Sapphire. This one is relatively easy because Sapphire only offers a single 5600 XT model, the Pulse edition, though there are three different part numbers. I wrote about this earlier in the week, and since then it looks like Sapphire has uploaded an even newer VBIOS file and made the process easier, through its TriXX utility.

Both the updated BIOS and TriXX utility can be downloaded here.