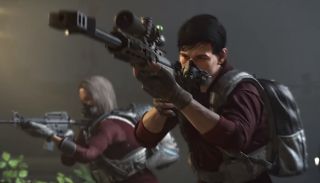 Today marks the start of The Division 2's open beta. I got to play the private beta last month, which was a healthy 45GB or so download. When the open beta started today, I was concerned I'd have to download the whole game again, despite what were likely only a few updates to the game files between betas. Thankfully, Ubisoft's UPlay client was smart and saw the private beta folder and used those files. The result was a much more palatable 13.56GB download. Thanks, Ubisoft, for respecting my time and my bandwidth quota!

Sadly, I've been in this situation with a few other games over the years, and there are plenty of instances where the next beta update or the full game release doesn't bother to check for existing files. This is a major pet peeve of mine, and something game developers need to become more vigilant about as their games balloon in size.

Why games are so big

Today's games can be upwards of 100GB. Why? Check out our feature talking to game developers about how game sizes got so huge.

Like many other people in the US,  I have a 1TB per month bandwidth quota from Comcast. That quota is feeling increasingly limiting in the modern world of video streaming and 50+ GB game downloads. Comcast had an unofficial 1TB quota for years before enforcing it, and in the time I've had a Comcast subscription my internet speed has more than tripled. But that quota has stayed the same.

Massive patches for already-massive downloads shouldn't be the norm, unless that patch has a real reason to change core files. Make sure patches are designed to only update the changed files, please! Did we really get 13.5GB of changed files for The Division 2? Maybe, maybe not, unless there were a lot of texture or video updates to stuff into the download.

An even bigger problem for my bandwidth cap is that some digital gaming storefronts offer no easy way to import game files and folders. UPlay used to be this way, but eventually it started including an "import folder" option. The Blizzard, GoG Galaxy, Origin and Steam launchers all manage this through various means as well. You know which launchers don't? The Epic Store and Windows Store. Epic's at least got a workaround, though: start the download, pause it and exit Epic, copy files from a different folder into the Epic folder, and then restart the download. Yuck. With the Windows Store, you're SOL.

While it's true that high speed Internet is more readily available these days, there are plenty of people who still get by with less than a 25Mbps connection, which means a 45GB download would take at least four hours. And with a family of five, I'm finding 1TB per month of data an increasingly paltry amount. Hopefully more games realize this and implement intelligent patching systems to avoid larger than necessary downloads.

For now, I'll celebrate the small victory of The Division 2's reasonable beta patch. Hopefully UPlay doesn't disappoint when I transition from beta files to final game when The Division 2 launches in a couple of weeks.

3/11/2019 Addendum: Curse you, Ubisoft! After praising the open beta, the full release of The Division 2 initiated a 41.06GB download, which as far as I can tell is the entire game. Again.