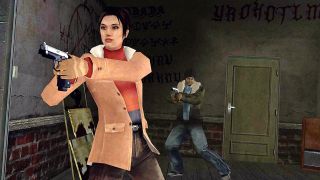 Fahrenheit: Indigo Prophecy Remastered, an update of the 2005 Quantic Dream adventure that was revealed, apparently unintentionally, a few days ago is now available for purchase. There's also a launch trailer, some screens, and even a website, all of it released entirely without fanfare.

It's a bit odd, isn't it? Fahrenheit was enough of a success that I'd think a re-release would be worthy of some noise, and yet the whole thing has happened in relative silence. You can get a good look at what's going on, however, at fahrenheit-game.com, which explains among other things that the remastered version "features updated graphics, full controller support and is based on the uncut/uncensored version of the game."

The "uncut/uncensored" descriptor refers to the differences between the European and North American versions of the game. Fahrenheit was released as Indigo Prophecy in North America, apparently to avoid confusion with the Michael Moore film Fahrenheit 9/11, but more significantly it was also missing a number of sex scenes, one of them interactive, that would have put it over the ESRB's Adult Only line and thus prevented its release on consoles. (Sony and Microsoft have policies forbidding AO games on their systems.) The Remastered release has restored all those missing naughty bits.

Updated or not, the visuals are still far from cutting-edge, and it can be tough to tell the originals from the HD versions without looking closely. It's possible to switch between the original and updated graphics while you're playing, which might offer a moment or two of curiosity value, and of course the option to play with a controller is a big bonus for people who like that sort of thing. It's also not terribly expensive, going for just ten bucks on Steam, Amazon, and, for you Mac and Linux hounds, GameAgent.

That's a pretty decent price for a critically-acclaimed adventure, but I would be remiss if I didn't point out that GOG has the original—also uncut and uncensored—for $6. That's just for Windows-based PCs, mind, while the Remastered release is also available for Linux, Mac, and iOS, but even so, I can't say I'm convinced that Fahrenheit: Indigo Prophecy Remastered is quite as essential as it first appears.