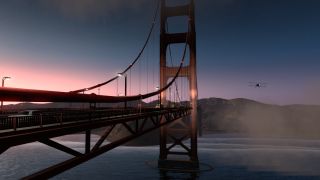 This is the second part of Jeremy's mission to reconnect America through the power of logistics, belief and on-the-nose symbolism—Death Stranding style. You can read the first part here, and the second part here.

A Californian once claimed that heaven is a half-pipe. It's a fitting analogy, since nobody invented the half-pipe: they simply believed in it.

Back in the '30s, the influential Finnish architect Alvar Aalto built a strange swimming pool defined by organic curves. Then a Californian, Thomas Church, yoinked the idea for his famous Donnell Garden, which was copied throughout the state. Finally, during a drought in the '70s, LA kids recognised the empty pools for what they were: perfect skating spaces.

That's the power of connection. Ideas from half a world away can inspire in ways that were never intended. It's why we're on this mission, to reach the west coast and connect up America through transit. As I take the road out of Vegas to California, I spot the skaters in a roadside park, rocking side to side in blissful pendulum.

A fleet of hot air balloons flies over the 95 to Fresno. They remind me of the undead squid-things that hover over the water in Death Stranding, the game that inspired this journey.

Welcome to California, reads a sign in Death Valley. The surrounding scene is like a state-approved postcard, from the fluffy clouds in the sky to the classic cars and Harleys cluttering the lay-by. A tourist crams four people into frame with her selfie stick.

I'm not particularly sorry I can't get out—when my partner tells the story of visiting Death Valley, she describes the feeling of her eyeballs sizzling.

My plucky little truck handles winding mountain roads better than expected. As the air gets thinner, I'm grateful for the engine upgrade I installed back in Vegas. Did you know, vehicles breathe just like us? At higher altitudes there's less oxygen for them to take in, so they need extra power to keep pushing forward.

A couple of times, on tight corners, I feel the rig's balance begin to go. Birds of prey hover above, and the first storm clouds of my trip roil in the distance. I haven't even bound a key for the windscreen wipers yet.

Father Crowley Overlook marks the halfway point to Fresno, and the perfect spot for a breather. Fighter jet pilots test their skills in this narrow canyon, and perhaps imagine they're navigating the trench of a Death Star. Please, pilots, lend me your precision handling on the way back down the mountain.

Can you work out the missing letters in this delapidated motel sign? COFFEE
SH P, LA ALI N  G IN S BA RB QUB. I can't. Whatever was supposed to entice us off the road is now a mystery.

I'm so busy ogling that I miss my turning and cause a crash when I back up, sandwiching a police car between an SUV and a coach. Its siren wails briefly in protest, and I'm fined $380.

Mercifully, Fresno is the site of my biggest payout to date: $15k. It won't cover the truck I bought with borrowed money, but it'll keep the bank happy for the rest of the week.

It's time to take this to the coast. Death Stranding's journey ends at the beach, and so will ours, in San Francisco. And we'll do it Kojima style: with a trailer full of nuts.

Today's Bay Area soundtrack is Dookie. The breakthrough Green Day album saw the group branded as sell-outs for cavorting with a major label. But it brought '90s punk to the masses, not to mention a relatable anthem for the anxious and neurotic in the form of hit single Basket Case. Perhaps some principles are worth sacrificing to connect up the world.

The freeways here are slow. California sets its own pace. I flick on cruise control and look about the cab. Never noticed those cup holders before. And these rows of buttons I'm not pressing—have they been here the whole time?

You know you're getting too laid back when you forget to steer. The truck bumps against the high kerb of a gas station. It's just a little dint, though: the vehicular equivalent of worn jeans.

There it is: the ocean. A huge cargo ship is harboured in Oakland. It makes my efforts at transit seem petty by comparison. But it's all about diffusion, isn't it? A ship is no use without the trucks and delivery drivers to carry those shipments to those who need them.

In Death Stranding, the beach is where the dead are. Here, in San Francisco, we'll settle for The Grateful Dead. "Watch your speed," they sing, helpfully.

I enter the city through the docklands to drop off my final delivery, and once the trailer is unhooked I'm freed—rolling around without a weight at my back for the first time since this journey began.

It feels odd to drive just for its own sake, the only line on my sat nav the yellow one I leave in my wake. I find a very steep street and drive up that, just to feel San Franciscan. In my own small way, I've helped feed this place. My nuts will be on hipster salads by the end of the week. So to speak.

I'm running low on fuel, but it's not much further now. "Lately it occurs to me what a long, strange trip it's been," sing the Dead.

You know we had to end this thing on a bridge. It's beautiful, redder than usual in the dying light. A symbol of connection, in defiance of Alcatraz across the Bay.

I'd love to stay. But that's not what a trucker does. They connect us together; they don't participate in the world they build. Instead they ride into the sunset, like John Wayne on eighteen wheels.

It's like the Grateful Dead say: "You pick a place to go, and just keep truckin' on."