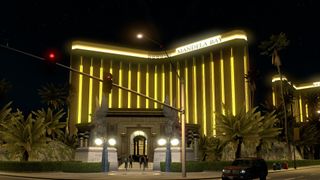 This is the second part of Jeremy's mission to reconnect America through the power of logistics, belief and on-the-nose symbolism. You can read the first part here.

The electricity pylons over Flagstaff, Arizona march off beyond the horizon in convoy. I envy them a little. My journey to the west coast of America hasn't been nearly so steady.

Right now, without a rig of my own, I'm leapfrogging my way across the states in vehicles loaned by trucking companies. Often their jobs take me back a step, to a city I've already seen, before I can move on to the next. It might be a handy Kojima-like metaphor for the constant battle of social progress, but frankly: I've got the message already.

Which is why I need to reach Vegas. There I can buy my own rig, gain access to a whole new market, and pick my route to the ocean.

Today I'll be driving a peppy Volvo with a slicked-back roof, and filling the cab with the sounds of Sinatra at The Sands. "Weatherwise, it's such a groovy day," sings Frank. He's not wrong.

It's been a clean and easy ride down to Kingman, banked by pines and heavy transit. I decide to take Route 66 and make the last leg a little rougher. This was the Mother Road, the one that carried refugees from ruined farmland all the way to California in The Grapes of Wrath.

The ebbing sun grants the trail a red halo. But thanks to American Truck Sim's compressed geography, the view on 66 is dominated by the bigger, more modern highway that replaced it. This once living vine has been snapped off.

Kingman is a strange place at this hour. A man stands serving ice creams from his truck in the dead of night.

A famous wagon road used to pass through here, until it was made redundant by the railway, and then Route 66, and then the highway. Connection, it seems, is a constant work in progress.

Finally, a shipping company tasks me with taking fireworks to Nevada. It's a journey that's going to take me through Beale Street, along the Hoover Dam, and then straight down the strip.

The jagged silhouettes of palm trees poke through the dark. Green and red stars appear in the sky. And then huge hotels pop into view around them, entering draw distance with the sudden pow of a Count Basie brass section.

This is the only place I've visited where the speed limit increases as you enter town. I'm supposed to slingshot around, using Vegas' gravitational pull to fire me into Primm, but I'm going to spend some money that isn't mine first.

If I buy a truck now, it'll be sent all the way back to HQ in Roswell. I'll effectively have to start this road trip from scratch. Better, then, to buy a local garage to house the vehicle here in Vegas. It just so happens there's an ex-firestation on the edge of town, and a bank happy to lend me $180,000.

I've never seen so many lanes on a road as the one that takes you past the 43-storey golden facade of Mandalay Bay. This city seems designed to bamboozle, to make you forget where you were headed tomorrow.

The gleam of the Volvo dealership is the closest I'll personally get to the glamour of Vegas. Of course the place is closed, so I'll need to nap in the adjacent parking lot til morning.

They say that if you see two cars parked bumper to bumper in Vegas, then their owners are romantically involved. That's what triggered the jealousy of a local songwriter, and in turn, the writing of Mr Brightside. It started out with a kiss, how did it end up like this?

Oh, bollocks. Thanks to Truck Sim's inflexible resting system, I've overslept. Now the fireworks are late, but I can't leave without buying a truck. The VNL 300 will be a $100,000 downgrade from the 730 I'm currently driving, but it'll be all mine. Sort of. I'll be paying back $1,814 a day for more days than I care to think about. No room for botched deliveries or crumpled bonnets.

Still: this is Vegas, baby, and I'm here to gamble. I fit the 300 with a stronger engine, as many mirrors as I can afford, and paint the cab in shiny Sovereign Blue.

In neighbouring Primm, the neon sign of the Starlite Inn promises peripheral Vegas magic but can only offer ESPN to pass the time. In what might be misplaced pride, I insist on perfect-parking the goods, which are now significantly late. The fee won't even cover my loan repayments for the day.

From here I could, technically, drive straight to the coast without taking on any more work, letting the bank pay for my jolly. But that's not in the spirit of this mission. It's about connection, and connection means cargo. It's like teamster unionist Jimmy Hoffa says in The Irishman: "If you got it, a truck brought it."

I decide to take more fireworks to Fresno, California. May as well bring some of Vegas' bright lights with me.

All the traffic lights turn green as I leave Las Vegas to the strains of Come And Get Your Love. Redbone were Fresno boys who perfected their funk rock performing on the strip, before becoming the first Native American band with an international number one single. They sang and played on TV in Native clothing, spreading their culture as far as the signal would carry them.

Today, Redbone's discography is consigned to '70s nostalgia, with one crucial exception: the first 15 seconds of that number one single. On TikTok, the infectious call and response opening has become the foundation of countless memes, tickling the ear bones of teenagers who'll never know the group's name. "Hail… hail…"

Connection is funny like that. As on Route 66, the infrastructure gets scrapped and replaced. But the signal never stops so long as there are people to send it. How's that for metaphor, Koj?

Check back tomorrow for the final leg.