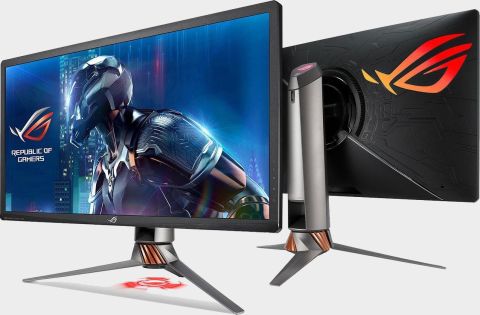 You get what you pay for with the Asus ROG Swift PG27UQ, and in this case the high price tag means a plethora of high-end features. It's definitely not made for every gamer, but if decadence was a PC monitor, it'd be this.

If a monitor could have every dream feature of a gamer's fantasy, the Asus ROG Swift PG27UQ would be on the list. It's the slightly richer cousin to the ROG Swift PG279Q, one of the best gaming monitors, ditching the traditional flat base for an alien-like tripod that casts the ROG logo on your desk like a homing beacon. It's an aggressive look that compliments the extreme list of specifications on this monitor, which have a price tag to match. 4K gaming with all the other goodies attached definitely costs a premium.

Along with a maximum resolution of 3840x2160, this 27-inch gaming monitor has an overclockable refresh rate up to 144Hz (native 120Hz). It uses a standard widescreen aspect ratio of 16:9 and supports Nvidia G-Sync HDR with a peak 1000 nits brightness. The panel is a Quantum Dot IPS display with a wide DCI-P3 color gamut, a 25 percent wider color range compared to sRGB monitors.

That's not all, as it has a range of connectivity options: Display Port 1.4, HDMI 2.0, and a USB 3.0 hub. The PG27UQ can also swivel on nearly every axis, so you can adjust the height, tilt, or even turn it vertical. The monitor has RGB lighting integrated into the logo on the back and is Aura Sync enabled, so if you have other RGB Asus hardware components, you can make them all flash the same colors of the rainbow at the same time. The only potential downside is the 4ms response time, but I'd happily sacrifice a bit of response time to avoid using a TN panel.

Extra features aside, you can use this monitor for more than just gaming, as it has all the right color and resolution features for professional photo and video editing. But why spend $1,500 on a 4K gaming monitor unless you have a GPU that can push the graphics of any game to its absolute maximum—and even then you might be just scraping by with 60 fps if you have the settings cranked up to ultra, with ray tracing turned off.

The RTX 2080 Ti, the best graphics card you can buy, will net you an average of 64 fps on Assassin's Creed Odyssey and Shadow of the Tomb Raider, for instance, at 4K on the highest graphics settings. Anything less than that graphics card and, well, let's just say you won't be able to get the most out of this monitor in every demanding game. This is an extreme monitor for an extreme build, though if you have the cash to drop and you like having the best of the best, it's a good investment. It's unlikely we'll see any clearly superior displays in the next five years.

The HDR and Quantum Dot IPS display make this monitor a standout from the rest of the crowd. Enabling HDR gives the graphics a noticeable dynamism in any resolution, though it sees the most benefit at 4K. Shadows are generally not too dark. Brightly lit scenes are not blown out. The PG27UQ excels especially well with gritty games like Metro Exodus and Outlast 2 with the HDR turned on—and honestly the lighting looks just as good compared to ray tracing in some instances. But depending on the in-game lighting, some finer details will be too dark to make out. Brightly colored games is where this monitor really shines.

IPS displays in general allow you to view the screen from off angle without the color quality being affected, but throwing Quantum Dot tech in there adds more backlighting to the LEDs, which allows for that wider color gamut. Also, the 144Hz refresh rate combined with G-Sync also helps create a near-flawless gaming experience. I didn't experience any screen tearing or micro stutter. Of course, you'll need to overclock the monitor to get up to 144Hz (via the display's OSD menu), but the native 120Hz isn't so bad. It's not like most games will even hit 120 fps on current hardware at 4K.

The Asus ROG Swift PG27UQ costs as much as a good mid-range or high-end PC, but considering the list of features, you get what you pay for—and it's a lot. This monitor has been on the market for nearly a year now, but it's still the top-of-the-line offering. In fact, the only monitor that even competes with this is the Acer Predator X27, which basically has all the same features with a slightly different stand and a higher price.

You'll want a great GPU to take advantage of everything—and that GPU should ideally be a GeForce graphics card or else G-Sync won't work. With the appropriate hardware, ever game can run smoothly with the refresh rate synced to your framerate, whether that's at 40 fps or 144 fps. If you're targeting maximum framerates for competitive reasons, you'd probably be better off with a 1080p resolution and display. Running at 1080p and low to medium quality just to hit 144 fps would mean money wasted on this monitor. But this is a monitor for more than just games.

If you're the 'go big or go home' type, this monitor is the current king of the hill. It will also function just fine as a productivity monitor, along with gaming or photo/video editing. You get the benefits of a high resolution and color depth at the desktop, and your gaming needs will be met for years to come.

You get what you pay for with the Asus ROG Swift PG27UQ, and in this case the high price tag means a plethora of high-end features. It's definitely not made for every gamer, but if decadence was a PC monitor, it'd be this.