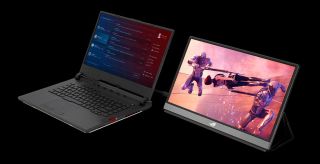 There must be somewhat of a thriving market for portable displays that users can plug their laptops into, because there are plenty of options out there. Most are not aimed at gamers, though Asus is planning to change that oversight with the ROG Strix XG17AHPE, a 17.3-inch portable display with a 240Hz refresh rate. It's like taking the core specs of the best gaming monitors, then cramming them into a smaller form factor.

Asus is one of two companies I am aware of with plans to target gamers with a portable 240Hz display. MSI is the other, and if the market proves be big enough, I imagine companies like Gigabyte, AOC, and Samsung will follow suit. But that's getting ahead of myself.

The XG17 first made an appearance at Computex last year, but then went into hiding. Now Asus has erected a product page with a full list of specs. Here are the pertinent tidbits:

The built-in battery is an interesting perk, with Asus claiming it can last up to 3.5 hours at 240Hz. Charging it for one hour yields 120 minutes of run time, the company says.

Connectivity options include a USB Type-C port, micro HDMI 2.0 port, and a 3.5mm audio jack. Note the lack of a DisplayPort input, which could have been useful for some laptops. These open up the possibilities beyond just connecting laptops, to include smartphones, tablets, game consoles, and even cameras.

What's the point? Straight from Asus...

"Mobile graphics processors get faster every generation, which is great for rendering the latest AAA titles at playable frame rates while you're on the road. But nowadays, serious gamers need more than a smooth 60 fps. The world of esports demands higher performance to facilitate quick reactions, and high-refresh displays are standard for both practice and competitive play. The ROG Strix XG17 steps up to the challenge of delivering ultra-high-refresh gaming anywhere you go," Asus explains.

I see the potential for laptops, as even though higher refresh rates are permeating the market, 60Hz is still the most common. Beyond that, however, this could be an interesting accessory for use with Stadia, Google's cloud gaming platform. Overall, though, I think this will prove a relatively niche category.

Unfortunately, Asus still has not announced a price or a release date. Now that it has a product page, however, I'd expect it to land in retail relatively soon.