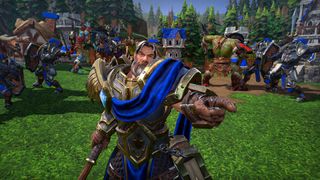 AMD is pushing out a new Radeon Software Adrenalin 2020 Edition 20.1.4 GPU driver, and with it comes a round of optimizations for Warcraft 3: Reforged. Anyone who owns a Radeon RX 5700 XT graphics card can expect a performance bump of up to 11 percent with the latest driver compared to the previous 20.1.3, according to the release notes.

It's not clear what owners of other Navi cards (like the new 5600 XT) can expect in relation to Warcraft 3, and the same goes for AMD's Vega (Radeon VII, for example) and Polaris (Radeon RX 500/400 series) cards. AMD only offered up a single performance claim.

The 20.1.4 driver is also optimized for Journey to the Savage Planet. In addition, it comes with the usual round of bug fixes, including the ironing out of a couple of glitches associated with the Vulkan API. Here's the full list:

One thing that's encouraging is the number of addressed issues in recent Adrenalin driver releases continues to wane, compared to the initial overhaul introduced at the end of 2019. In theory, this means AMD has made a bit of headway in eliminating a large portion of bugs that lingered into the first few driver releases.

That doesn't mean the work is finished. The release notes list out eight known issues, including a black screen bug affecting 5700 series cards. Here's a look:

You can grab the latest driver through the Radeon Software utility, or follow this link to manually install it. And as always, check out our guide on how to update drivers for tips on best practices.