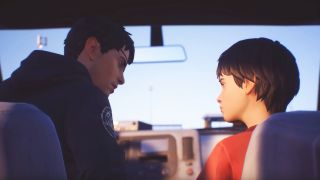 What are all the different Life is Strange 2 endings? Choice has always been important to Dontnod's adventure series, but in Life is Strange 2, your decisions are felt more powerfully than ever. Sean and Daniel's epic journey across America may now be over, but the decisions you made across the game’s five chapters have shaped the pair's destination more than you might think.

Warning: Naturally, this article contains major story spoilers for Life is Strange 2. I recommend you experience the story yourself, as it was intended, before you dig into spoiler territory below. So, here are all the Life is Strange 2 episode 5 endings and how you get them.

How many Life is Strange 2 endings are there?

The first game ended in two main ways, but there are a whopping seven different Life is Strange 2 endings. If you’ve already finished your adventure and curious about how they all diverge, check out each one in the video further down this guide.

How does the endings system work, anyway?

Before I get to how each ending works, there are a few important things to note. At the very end of the game, Sean and Daniel are facing off against a police blockade at the USA/Mexico border. Here, Sean is presented with a choice: he can surrender and turn himself in, or use Daniel’s powers and escape.

The thing is, Daniel has a mind of his own. Throughout the game, the example Sean sets for him determines his ‘Morality’. If one large wolf appears in the bottom-right corner of the screen, the decision affects Sean, but if only a small wolf appears, it affects Daniel. If two wolves appear, both brothers are affected.

If you taught Daniel right from wrong—discouraging him from using his powers violently, for example—he will have high Morality. However, if Daniel sees this kind of behaviour from Sean, he learns from it, and is more likely to have low Morality by the end of the game. Your actions will have affected Daniel’s actions in previous episodes, but the final Morality score has the biggest impact on your ending.

Some stem from the same set of results during the showdown at the border, but are shaped by decisions in earlier episodes. Sean’s friendship with Lyla or his romance with Finn or Cassidy in episode 3 can add some minor changes to the game’s final cutscenes.

All Life is Strange 2 endings

If Sean decides to surrender at the border while Daniel has high Morality, he tells Daniel that the story of the wolf brothers ends now, and the two embrace. Sean is arrested by Agent Flores, who says Daniel will be looked after—he then moves in with his grandparents in Beaver Creek. 15 years later, Daniel and Karen meet Sean as he leaves prison. That night, the pair camp out in the woods together before parting ways again the next morning.

If Sean chooses to call Lyla at the end of episode 1, she accompanies Daniel and Karen in this ending cutscene, and the pair will embrace.

If you surrender but Daniel has a low Morality, Sean throws away his car keys, but Daniel will refuse to accept your decision. Using his powers, he moves the car forward and past the border, before noticing that Sean has been shot and killed by police.

Many years later, Daniel has made it to Puerto Lobos, where he has built a small memorial to Sean. When he's attacked on the beach, he uses his powers to defend himself, but ultimately spares the lives of the gang members who approach him. Unsurprisingly, this is considered Life is Strange 2’s ‘bad’ ending.

If you used Daniel’s powers to escape to Mexico, but he has high Morality, Sean begins driving forward and asks his brother to move the police cars in front of him. Daniel initially refuses, but eventually relents and opens the gate to allow the car through. At the last moment, Daniel leaps from the car, allowing Sean to make his escape.

Daniel moves into his grandparents’ house, occasionally using his powers, but appears to be under some kind of house arrest. Here he remains in contact with both Sean and Karen, receiving a collection of photos during the final cutscene.

Depending on decisions made in previous episodes, this ending has a few variations. If you romance Cassidy by listening to her song in episode 2, drink with her, join her for a midnight swim, kiss, refuse the heist, and enter her tent, she appears in a photo next to Sean.

You can also romance Finn by having Sean say he is attracted to some boys, agreeing to the heist, kissing him, and then saving his life in episode 3. In episode 4, Sean can visit Finn’s hospital room and forgive him for the heist to successfully romance him, after which he appears in the photo, instead of Cassidy.

If Sean romances neither Finn or Cassidy but still gets this ending, he appears in the photo alone.

If Daniel has low Morality when Sean asks him to cross the border, Daniel gets out the car and uses his powers to defeat the police officers and open the border gate. Daniel then re-enters the car, and the brothers drive into Mexico.

Six years later, Sean and Daniel are working in their father’s old repair shop in Puerto Lobos, where gang members arrive and threaten Sean. Daniel uses his powers to hurt the leader, but lets them live. The brothers go outside and sit on the beach, drinking beer and smoking together.