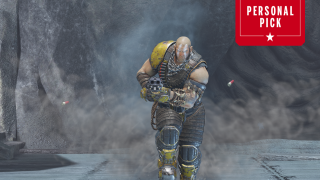 Alongside our team-selected 2017 Game of the Year awards, each member of the PC Gamer team gets to champion one favorite from the year. We'll continue to post new personal picks until the end of 2017.

How do you remake Quake in 2017? It's like being asked to improve on sunlight, or to whip up a sequel to vanilla ice cream ("Visually and narratively, Vanilla 2: Retribution fails to live up to its predecessor.—PC Gamer, 60%"). As a first-person shooter, Quake is defined by its purity, by its absence of filler, bells, whistles, or any features that might dilute its obsessive emphasis on movement, aim, and reflexes.

This was the challenge facing id Software (and Saber Interactive) over the past few years as they worked on a follow-up to one of the most beloved shooters ever. The studios must've known that casting Quake into a new subgenre—say, something closer to Overwatch—would've meant abandoning its identity as an arena FPS. But with Quake Live live since 2010, the reboot had to be more than an HD remake. Some type of change seemed inevitable.

As QuakeCon and Quake Champions' launch neared, it became clearer that the game would make some major compromises on the purity of the past. Would Champions be free-to-play? Yes, but you could pay $30 to unlock every character. PC exclusive? Yes, and it'd support a 120Hz refresh rate with unlocked framerates. Would it be on Steam? Yes. Moddable? No. Player-hosted servers? No, but you can individually toggle server regions. Loot boxes? Yes, but cosmetic-only, thank Shub-Niggurath.

The most controversial change by far were the Champions themselves. For the first time ever, Quake's characters wouldn't be simply skins, but 13 bespoke styles of play with different movement speeds, bunnyhopping techniques, hitboxes, health and armor stats, and an active and passive ability. Id gave asymmetry a big bear hug, a decision that went against the spirit of a level playing field and made some diehards uncomfortable.

To my surprise, as one of those diehards, that same shrewd move made Champions a deft adaptation of a classic. Champions' unique characters not only gave newcomers gateways to play without mastering every school of Quake (suck at crawling the map for pickups? Play B.J. Blazkowicz, who auto-regens a portion of his HP), it preserved decades of arena FPS history in playable forms. You can experience Quake IV's crouch sliding in Slash, the hoverboarding freak. There's Unreal Tournament's double-tap dodge in Clutch, the giant robot. There's the original strafe jump in Visor. Quake Champions was at once a step into the future and a living museum of what made Quake great.

And at the highest level of play, the Champions introduced the concept of drafting to Quake. A Sorlag player dueling against a Nyx has its own dynamic: Nyx is much more fragile, but she can negate Sorlag's acid spit with her temporary invisibility and invulnerability. The Ranger can hurl an orb across the map at low speed, and telefrag. It made for some good spectating at the Quake World Championship at QuakeCon, just two days after the game's launch.

Champions certainly has its issues. The netcode isn't exactly where it needs to be, matchmaking is opaque, the runes system is clunky, and its menus are a little frustrating to navigate. But like the Quakes of old, this is a rare FPS where ordinary actions—hitting a railgun shot; timing the mega-health correctly; winning a lightning gun duel—feel extraordinary. When you midair someone with a rocket while bunnyhopping at max speed, your brain struggles to grasp how your hands achieved it, and you feel like there's some preternatural power within you. And the map pool, though still a little too small, is a set of grim, fun first-person playgrounds for skillful movement.

Filler and flaws fully considered, Quake Champions was my favorite game of the year because it showed how indestructible the purity of Quake is. Adapting a long-dormant classic is one of the hardest things for a dev to do, and id managed to modernize a genre that very few (see: LawBreakers, Epic's current UT, Toxikk, Ratz Instagib) have bothered trying to reinvent.