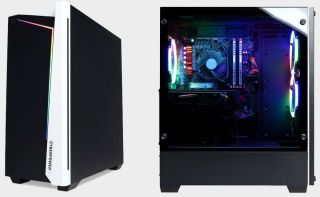 Time and again, we see prebuilt desktop deals that prove you don't have to spend a fortune on a new build. Further proof comes by way of this CyberPowerPC Gamer Xtreme configuration, which pairs an Intel Core i7-9700F processor with an Nvidia GeForce GTX 1660 graphics card. It's on sale right now at the Microsoft Store for $899.

You're saving $200 with this deal, and getting a configuration that can average at least 60fps at 1080p with ultra settings in most cases (the only exceptions are notoriously punishing games like Deus Ex Mankind Divided, Assassin's Creed Odyssey, and Metro Exodus). That's an enticing proposition for an $899 PC.

CyberPowerPC Gamer Xtreme Desktop | i7-9400F | GTX 1660 | 16GB RAM | 512GB SSD + 1TB HDD | $899 (save $200)
This configuration is exclusive to the Microsoft Store, with an attractive price. For less than a grand, you get a setup that packs enough punch to play most games comfortable at 1080p with the visual settings cranked to ultra.
View Deal

This is basically a beefed up version of the Gamer Xtreme that we highlight as one of the best gaming PCs in the budget category. It sports the same CPU and GPU as the one we pointed, but has twice as much RAM at 16GB, and more storage—it pairs a 512GB NVMe SSD with a 1TB HDD. This particular configuration is actually exclusive to the Microsoft Store.

Adding storage to a PC is easy enough, but we like that this comes with a 512GB SSD to start with, rather than one that is half as capacious. Games aren't getting any smaller, after all. We also like that there's 16GB of RAM.

CyberPowerPC bundles in a gaming keyboard, mouse, and mouse pad, so you save a bit there as well. Even if you have other peripherals in mind, if nothing else it's nice to have these as a backup.