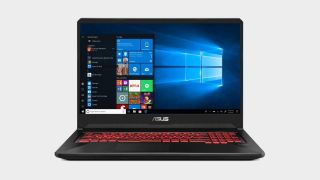 Looking for a gaming laptop that doesn't cost a king's ransom? Well, you're in luck. The Microsoft Store is selling the Asus TUF Gaming FX705DY-EH53 for just $599 right now, which is $100 off its list price, and several hundred dollars below what it sold for on Amazon just a few short weeks ago.

This one plunged in price when Black Friday rolled into view. Prior to that, however, Amazon had it listed at $799.99. Pricing at the Microsoft Store is a bit more difficult to track, but a trip in the Wayback Machine shows this one was selling for list ($699) in mid-November.

This model isn't going to compete with the best gaming laptops money can buy, that's a given. However, being able to play most games at its native resolution is a fair expectation. You just may need to fiddle with the image quality settings.

Beyond the core components, the list of amenities is standard fare, including 802.11ac and Bluetooth 4.2 wireless connectivity, HDMI and DisplayPort outputs (one each), two USB 3.2 Gen 1 Type-A  ports, a 3.5mm headphone/mic combo port, and a 720p HD webcam. It also sports a backlit keyboard and a brushed metal aesthetic.