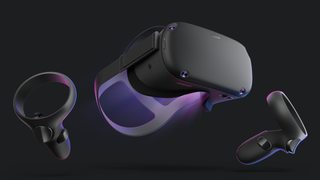 A while ago I was madly into VR, bending the ear of whoever would listen about how incredible it was. I even wrote a weekly column on the subject for PC Gamer, the Rift Report, in which I investigated, among other things, trucking, space exploration, and weird sex games. It was an exciting time—experiencing a new technology as it emerged, seeing developers feel around in the dark for ways to make virtual reality exciting, convincing, and non-sick-inducing. But then the novelty wore off, almost overnight, and I drifted away, back to the familiar flat plane of a monitor. I'm still not really sure how it happened.

Five years later and VR is a very different beast than it was when I was wrestling with those temperamental Rift development kits. It's all so streamlined now—particularly when it comes to the Quest, a portable, wireless, self-contained headset released by Oculus in May last year. I recently got my hands on one, and once again I have become a VR guy—pontificating about how great it is to anyone within earshot, whether they want to hear it or not. After being numb to the technology for years, I'm enjoying being excited about it again.

The problem with explaining why virtual reality is good is that it's difficult to convey the experience in words. It's like telling someone about a dream you had: incredibly fascinating to you, but deeply boring to the person listening. You really have to try it for yourself to 'get' it—which is easier than ever with the Quest. You don't need a powerful gaming rig to run the thing: all the hardware has been squeezed into the headset itself, meaning you could take it over to a family member's house without having to drag your PC along.

Imagine if, instead of breathlessly telling someone about that fever dream you had, you could just inject it directly into their brain and let them experience it for themselves. That's the Oculus Quest, in a roundabout way. It's also enormously freeing being able to enjoy VR without having a wire trailing behind you, and with 2-3 hours of battery life, you can go long stretches without having to plug it back into the wall to juice it up. You might be made of steelier stuff, but I personally can't play VR games for more than 40 minutes at a time without feeling peculiar, so the battery life hasn't been an issue for me so far.

Setting the Quest up is also trivially easy. You install the Oculus app on your phone, connect it to your Wi-Fi, and minutes later you slip the headset on and find yourself 'inside' its slick VR interface, browsing the store, using the motion controllers to point and click, looking for games to play. There's also a brilliantly fun interactive tutorial that teaches you how to use your virtual hands, and ends with you dancing with a robot. I also love how intuitive setting up your play space is. A front-mounted camera gives you a fuzzy, Terminator-like view of your room, and you use one of your controllers to draw a line indicating what space you have available. This creates a so-called Guardian barrier that will flash up and warn you if you stray outside the boundary you set.

Oh, and I should add that I live in an absolutely tiny flat. Like, seriously miniscule. But after shoving my couch against the wall, I found I had more than enough room to play. The Quest warned me that my Guardian barrier was smaller than the recommended size, but it didn't seem to make much difference. If you're really struggling to make room, you can switch from roomscale to stationary mode, which lets you sit in your desk chair, or stand in one place, and still enjoy some (but not all) VR games. It's remarkable how the Quest does all this, including tracking your hands, without any external sensors or cameras. It honestly feels like magic.

However, a limitation of the Quest quickly becomes evident when you start hunting for something to play. Out of the box, you can only play games made specifically for it. And, as I write this, there just aren't that many to choose from. I mean, there's some great stuff on there. Vader Immortal is a brilliantly tactile, entertaining blast of Star Wars with great production values. National Geographic Explore VR is the most fun I've had sitting on my kitchen floor pretending to paddle a kayak. There are Quest versions of VR favourites like Beat Saber, Superhot, and Job Simulator. And being able to enjoy these without being tethered to a PC feels pretty special. But the selection is a little limited—especially compared to the regular Oculus Rift store.

But here's the thing: you can easily turn the Quest into a regular Oculus Rift. With a long, sturdy USB 3.1 cable—I used this one—you can connect the Quest to your PC and play anything on the Rift section of the Oculus store—as well as SteamVR, and any other VR game you happen to have installed on your PC. Which means, yes, when Half-Life: Alyx is released, you'll be able to play that too. It works stunningly well, and with it I've been enjoying games the Quest couldn't otherwise handle, including the surprisingly brilliant L.A. Noire: The VR Case Files, mountaineering sim The Climb, and gorgeous edutainment thing Everest VR. Being stuck with a cable again is a bit of a letdown after experiencing the joy of the Quest's wireless mode, but it's a worthwhile sacrifice.

They say you should only be in VR for 30 minutes at a time, taking 10-15 minute breaks, even if you feel like you don't need one—a rule I brazenly ignored last Friday night when I accidentally played L.A. Noire for an hour and a half. When I took the headset off, I felt really bizarre, like I was somehow disconnected from reality; like my arms weren't my own. This game is particularly effective because it simulates a pair of arms, and you can look down and see the tailored suit of Cole Phelps, which gave me a kind of sensory whiplash when I returned to reality. It was a curious sensation, and I didn't feel quite right for a few hours afterwards. VR sickness might sound like something out of a cyberpunk novel, but I can tell you from experience that it's real and it's weird.

That aside, the Oculus Quest is a hell of a thing: whether you're playing with it wirelessly, or using Oculus Link to experience bigger, meatier, more graphically intensive games from SteamVR, the Oculus store, and beyond. Lately I've been playing almost exclusively in Oculus Link mode, but I'm hoping more stuff will appear on the Quest store in the coming months so I can enjoy the cableless freedom again. With a retail price of $400, this is not a cheap piece of kit. But being able to double it up as a regular Oculus Rift via Link makes the price point a little more appealing. VR still has a way to go before it genuinely feels like stepping into another world. The resolution could always be higher, the response time faster. But the Quest is a great way to experience what it's capable of today without getting tangled up in a spaghetti of wires.