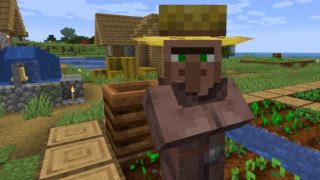 Update: Unfortunately, and maybe unsuprisingly, the Vatican's effort to create a less toxic environment for Minecraft players is not getting off to the best possible start. After word of the server got out, it quickly fell victim to a DDoS attack:

I'm looking at the logs of the Minecraft test server and it looks like there is a handful of people who are constantly connecting and disconnecting to fill the player slots and kill the server.Interesting...December 2, 2019

That's not the only problem, however, as Ballecer said in followup tweets that the Vatican setup was just a test server, and when the story went out—and particularly after it was picked up by larger outlets—the demand skyrocketed. There's currently no time frame for getting everything straightened out but they're working on it, and Ballecer said the test server will become the whitelist server once everything is switched over.

And in case there was doubt, the Holy See isn't putting up with any shenanigans.

The mods were watching you for more than an hour. That WASN'T random. 🤨December 3, 2019

The original story is below:

In September Father Robert Ballecer, a former tech blogger and host of The Week in Tech as well as a Catholic priest, asked his 23,000 Twitter followers which game he should "spin up a few servers for" in the Vatican. Given the options of Minecraft, RUST, Ark, and Team Fortress 2, 64% of them voted for the classic crafting game. And that's why the Vatican now has its own Minecraft server.

The idea is to create a place for "gamers who want a little less 'toxic' and a bit more community", and as Ballecer told Rome Reports, "You can invite people who want to be creative, who don't want to be toxic, and you create an environment in which people can express themselves and build up a relationship. And the relationship thing is the most important part. That's ultimately what I want to do with the server."

It's open now, and you can point your client at minecraft.digitaljesuit.com to test it out.