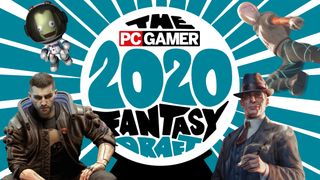 Hey, look up there: it's the games of 2020, sitting in an 18,000-seat sports auditorium alongside their parents, wearing their finest suits and pantsuits, waiting to be selected by us, the billionaire managers of extremely real teams of videogames, the editors of PC Gamer.

Last January we had fun drafting the PC games we expected to released in 2019. Still in the quiet early weeks of 2020, we're back again to pick favorites. Here's our mock draft of the games that we think will be great in 2020. Making predictions is fun, and treating PC gaming like a fantasy sports league is one way for us to see who on the PC Gamer team has the best eye for what's coming this year.

We finished drafting earlier this week. Here's the results, a lively discussion of how it went, and our predictions about the games coming in 2020.

Tyler: I went first, so obviously I was going to pick Cyberpunk 2077. I'm not sold on it yet, but CD Projekt made a lot of people's all-time favorite game, so it's a pretty safe bet. Even if the writing turns out to be garbage, surely people will be charmed by Keanu Reeves and sucked in by the scale and density of the world, right? If not, I may be doomed, because if it's a surprise bust, my whole list will be colored by the immensity of the error.

Chris: It sucks picking last! Yes you get two picks at once, but that really means that instead of seeing someone vulture one of your picks before your turn, you see multiple people vulture two of your picks. But I still think I did okay. We'll all still be as excited about Death Stranding when it comes out on PC, right? Right?

Evan: I thought you did great, Chris. Spelunky 2 and Mount & Blade 2 are about as safe as they come.

Robin: By the last round I was in a bit of a flap—my carefully curated wish-list was obliterated by other people’s picks within seconds and I was left scrambling to think of others. But overall I’m actually pretty happy with my lineup. I feel good about TFT, and (perhaps controversially) I think Legends of Runeterra will be huge—Riot just has such a huge captive audience to work with, and it’s clear it's going to be making a huge push this year. Beyond those I’m taking a gamble on Baldur’s Gate III and Avengers actually coming out this year, I’m hoping Temtem will take off in the way a Pokemon MMO should, I reckon A Total War Saga: Troy will be a solid series entry, and if Tell Me Why hits like the original Life Is Strange did, I’ll be laughing all the way to the videogame bank.

Joanna: I wasn't planning on drafting an entire list of scary games (I had Halo Infinite and Baldur's Gate III as potentials before they were snatched up), but it worked out that way. I'm generally clued into horror and psychological thrillers more-so than other types of games, but that's just my default setting in life. Little Hope was one I definitely wanted on there because Man of Medan was such a surprise hit. I know there's some skepticism around Vampire: The Masquerade – Bloodlines 2, but I think it's going to be just as good or better than Bloodlines. As for Carrion, who wouldn't want to play a platformer about an amorphous creature that kills everything in its path? Elden Ring, Little Nightmares 2, 12 Minutes, and Twin Mirror are all dark, dark, dark. And dark is in. Dark is what all the cool kids want.

Chris: Somehow Kerbal Space Program 2 didn't go until the third round, when Wes grabbed it. I had my chance. It was at the top of my list but I was suddenly gripped with fear that someone would take Spelunky 2, and then I couldn't leave Bannerlord to the masses, so I let Kerbal slip through my fingers. It went unpicked long enough for me to think I might still grab it, and then Wes stabbed me in the heart.

Robin: I thought I was going to be really clever by picking Microsoft Flight Simulator, only for Wes to take it in the second pick of the entire draft. And I really wanted Crusader Kings III—as much because it’s one of the games I’m most excited for as anything - but I was too slow to beat Savage to the punch. I felt very triumphant grabbing Baldur’s Gate III, but the more I think about it the more I think it probably won’t be out this year—I could see that hasty pick dragging my team down.

Evan: Yeah, 2019's summer announcement of Baldur's was tentative with few details. But overall I think our picks this year are much more certain on the calendar. Last year, 18 of the 70 games we picked did not release! Yikes. Have we learned our lesson about game delays? Nobody took a flyer on Age of Empires 4, which we're obviously looking forward to but isn't confirmed for 2020. No one bit on completely unannounced franchises like Call of Duty or Battlefield, which we'd expect to appear in October/November. I was surprised Apex Legends wasn't taken as an ongoing game, either.

Joanna: If Atomic Heart does come out this year (it's TBA right now), I'm going to be so bummed, because my gut tells me that game is going to do so well. A FPS set in an alternate Soviet Russia? Uh, yes please! But then again, no one else picked it probably for the same reason. If it was coming out this year I think someone would have put it on their list before me, anyway. Also, if I had the first pick, I would have grabbed Cyberpunk 2077 like Tyler did, because that is just an obvious choice (smart, Tyler), but I don't think that really counts as a regret. I'm happy with my spooky picks.

Tyler: Why did I pick Phantasy Star Online 2? It's releasing in North America this year, and it's massively popular in Japan, so maybe it'll be big. But it's still a game from 2012. If I wanted an MMO, why not New World or something? I guess I panicked and it's what popped into my head.

Evan: It's OK to come out as an enormous anime and MMO fan, Tyler. Don't be ashamed. For my part, I wish I'd remembered about Phantom Brigade, which has looked promising since I saw it two years ago at PAX.

What was the best late-round pick?

Chris: Phil's 6th round grab of Overwatch 2 was pretty masterful, and Harry nabbed Gods & Monsters, which looks pretty neat, in the 6th round as well. Robin also picked up Temtem in the 5th, which is basically Pokémon on PC that we're already enjoying in alpha.

Robin: Psychonauts 2—grabbed by Tyler in the last round—is a strong one, I think, assuming it comes out. And I think Phil was wise to take a punt on Overwatch 2.

Joanna: Boyfriend Dungeon (Harry) and Tell Me Why (Robin). Both great, under-the-radar-picks that could carry either of them to victory.

Tyler: Evan grabbed Industries of Titan in the last round, a game I picked last year but which didn't release. I think it has the potential to be a phenomenon. The big sci-fi 4X games always look interesting to me, but I get a little sleepy-eyed when I see spreadsheets displaying the resource production efficiency of 18 planets. This seems to be just the best bits: spaceship designing, tactical battles, and city-scale management so that I'm looking at a little model cyberpunk dystopia rather than an abstract galaxy map.

Robin: Despite hitting himself with the bizarre self-handicap of Phantasy Star Online 2, I think Tyler’s in a really strong position. Cyberpunk 2077 is just going to eclipse absolutely everything if it comes out. Rainbow Six Quarantine seems like a sure-fire hit, especially given they basically already tried it out as a mode in Siege. And I think Watch Dogs Legion could be huge - its systems-driven gameplay gives me visions of viral video clips all over Twitter, especially with that delay giving them so much extra time to make sure it's grand ambitions bear fruit.

Tyler: You don't know, Robin, in 12 months Phantasy Star Online 2 may be the only game we're talking about. Biggest release of the year. But I do think Wes' selection could turn out to be strong. Witchbrook won't release this year, so that was a mistake, but I can see both Microsoft Flight Simulator and Kerbal Space Program 2 being in our 2020 GOTY talks.

Chris: My only hope is a ton of games get delayed until 2021, like Cyberpunk and Half-Life Alyx. Otherwise, I probably don't have a shot. I think Phil is in a great position with Doom Eternal, CK3, Humankind, and Overwatch 2.

Joanna: I think any one of us has a shot. What's going to take someone out quick is if a game doesn't release in 2020.

Which editor is the early favorite for 2020? We'd love to hear which games we missed out on in the comments. Look for another check-in on the state of the draft from us later this year.