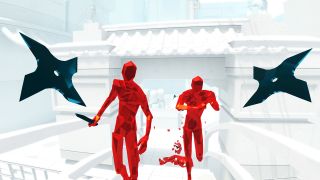 Superhot VR is one of our favorite VR games, one where "it’s possible to toss a brick at a man, knock his semi-auto pistol into the air, catch it, and bash him over the head with it before shooting three other men out of a helicopter behind you." It's done quite well for indie studio Superhot Team, as their director of special projects Callum Underwood boasted on Twitter: "SUPERHOT VR has grossed over 2 million dollars on all platforms in the past 7 days alone. Thank you players!!"

SUPERHOT VR has grossed over 2 million dollars on all platforms in the past 7 days alone. Thank you players!! 🎂🥳 pic.twitter.com/jkTINcGH4fDecember 29, 2019

Those numbers include an estimate of PlayStation VR sales because the relevant sales figures haven't been released yet, but as Underwood says in a follow-up tweet, "our IndieBI analysts are confident!"

Perhaps this has been the Christmas when VR headsets start showing up as presents on the regular, and perhaps the announcement of Half-Life: Alyx has invigorated wider interest in virtual reality. Or maybe it's just that Superhot VR is on sale and it's still the number one VR shooter everyone recommends.