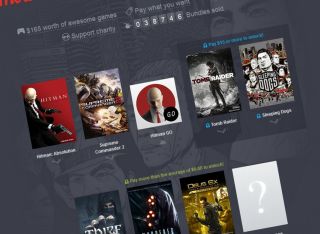 Square Enix is taking another run at the Humble Bundle, this time with some slightly newer games including Hitman: Absolution, Supreme Commander 2, and, for those willing to pay a bit more, Tomb Raider, Sleeping Dogs, and Thief—but not one of the good ones.

Beating the average purchase price adds Murdered: Soul Suspect, Deus Ex: Human Revolution Director's Cut, and the Thief reboot that came out last year. Kicking in $15 or more will net you Tomb Raider and Sleeping Dogs on top of everything else. As usual, more games will be added to the bundle "soon," which going by historical precedent means a week from today.

Speaking of Square Enix, earlier today the publisher invited indie dI think evelopers to pitch it new ideas for its Gex, Fear Effect, and Anachronox games. Other franchises may be offered up in the future, but for now, "we'll start with those and see what the response is like."

The Humble Square Enix Bundle 2 supports the Make-A-Wish Foundation and GamesAid, and as always you can throw a few bucks to the Humble folks as well. It's live now and runs until March 3.