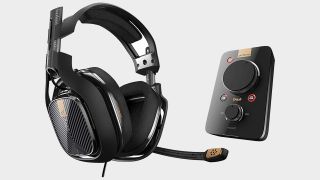 Keep in mind that these are the 2017 models of the A40 Headset and MixAmp. You could pick up this year's model headset for the same price but that does not include a MixAmp. The MixAmp is extremely useful tool that lets you adjust levels on the fly, and usually end up costing an extra $100 separately. So, you're pretty much getting a killer wired headset and free MixAmp, which isn't too shabby—and some of the best gaming headsets come with them.

Regardless if you go with the Xbox One or PS4 model, they will work fine on PC, as they both have USB sound card functionality. You just won't be able to use A40 TR's Xbox One MixAmp on PS4 and vice versa.

You'll have to move fast since the deal ends by the end of the day.