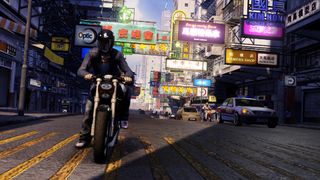 It's almost time to wake up some Sleeping Dogs, but first, we PC folks are being thrown a bone (ha ha, dog jokes). A trailer for the soon-to-be-released open world crime drama ( preview here ) runs down the PC-specific features we can expect, including DX11 support, multi-GPU support, a day-one high-res texture pack, and "increased world density," which isn't fully clarified.

While many of the features -- such as mouse and keyboard support -- are things we'd all agree should be standard in modern PC games, we all know how they can be overlooked or ignored. When that happens, we get sad, and publishers make less money, and they get sad too. And then all that frustration becomes kindling which ignites a raging fight over PC profits and piracy, and the inferno's hot orange fingers wriggle through investor meetings and comment threads, scorching passion and fun and leaving behind ashen words like "Triple-A" and "ROI." We don't want that.

What we do want is the stuff United Front Games and Square-Enix have promised for Sleeping Dogs. Oh, and of course it wouldn't be a bolstered PC release without a Team Fortress 2 tie-in .