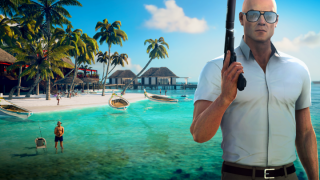 Today I read that Hitman 2 (the 2018 one, not Silent Assassin) sold 90% fewer copies than Hitman: Absolution, which broke my brain a little. And as I type this, only about a thousand people are playing it on Steam. Plenty of great games underperform, because sales are not a barometer of quality. Far from it. But this isn't some weird new IP or obscure indie game. It's Hitman! And not just any Hitman, but arguably the best Hitman in the series.

I know what you're thinking. Blood Money is the best Hitman, right? Curtains Down, You Better Watch Out, A New Life... all classic missions. That's why I said arguably, because there's a condition to this rather wild statement. Hitman 2 on its own is a great game, but probably not as great as Blood Money. However, throw in the DLC that adds all the levels from the original 2016 reboot and it's probably the best Hitman experience you can have on PC.

Why? Well, IO's assured Hitman reboots have deep systems that let you dream up creative ways to complete your objectives, making them supremely satisfying stealth games. Sneaking into a heavily guarded area, killing the target, making it look like an accident, then strolling out unseen, whistling a lil tune, is a sublime feeling. The AI is fun to screw around with, the levels are intricate and detailed, and it's all super polished, just like Agent 47's wonderfully shiny head.

But what really elevates Hitman 2 is its exceptional level design. Along with the 2016 maps, this is probably the finest collection of stealth puzzle boxes on PC. These complex, sprawling spaces are heaving with potential for creative assassination, from the idyllic Italian coastal town of Sapienza to the wind-battered Isle of Sgàil. Every location has its own distinctive personality, rich with systems to exploit, shortcuts to take, and details to discover.

Another thing IO excels at is creating a sense of place. These levels aren't just mechanically interesting; they're also atmospheric, exotic places to spend time in. Whether it's the leafy American suburbs of Whittleton Creek, Hokkaido's ultra-high-tech mountain hospital, or the bustling slums of Mumbai, these environments are prime examples of just how good IO's artists are when it comes to building immersive, detailed worlds.

The freedom is another thing I love. If you want to orchestrate your own elaborate murder, you can. The systems are deep enough. But you can also follow mission stories to gently guide you towards a solution. These are all worth doing at least once, because they let you dispose of these horrible people in an ironic, darkly satisfying manner. Ultimately it's just nice to have the choice of how involved you want to be in a hit, depending on your mood.

You can read Phil's review for a more in-depth analysis of what Hitman 2 does well, but I feel it's my duty to remind you that A) this game exists and B) it's incredibly good. And with two new levels added recently—a bank in New York and a tropical island in the Maldives—it's only gotten better since it launched. We love deep, systems-rich games on PCG, and while Hitman 2 isn't quite Deus Ex, it's among the finest stealth games you can play on PC today.