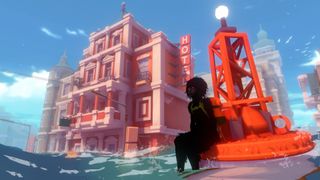 Guy Jackson is a musician composer with ties to film, television and games. As a Jo-mei’s resident composer and sound designer he has worked on several games, but none larger or more complex than their latest title Sea of Solitude. Here he tells me how he translated the game’s often heavy themes into music and why he champions young artists and underrepresented musical instruments.

PC Gamer: The soundtrack contains Sea of Solitude’s only track with lyrics, "I picture you before me" featuring Stella Angelika. This track doesn’t appear in the game, how did it come about and how was it used?

Guy Jackson: I always wanted to work with Stella on a track and found her voice and the mood it evokes to be incredibly suited to the game, so we went ahead. The lyrics are largely written spontaneously or improvised because Stella and I wanted to create something that comes from the heart. [Jo-Mei Creative directors] Conny Geppert and Boris Munser agreed and ended up using the track in early presentations to investors while securing funding for SoS, but later decided that having a  song with lyrics in the game would prove distracting to players. Instead I wrote an instrumental version, with a violin playing the melody part that is still in the game.

How much direction did you receive from the studio in working on the soundtrack?

I would travel to Berlin to a series of music-focused meetings where we discussed the gameplay and they talked to me about the moods they were looking for. Videogame music is a lot less static than music for films, so you need to be able to dynamically structure music around player actions or create loops while avoiding a palpable sense of repetition, so obviously that was a very important point to keep in mind at all times. It’s also an interesting challenge to work these pieces back into something slightly more linear that would work on a soundtrack album.

There are a lot of threatening-sounding elements in the tracks with a dark mood, what are some of the building blocks you use for pieces with an uneasy feel to them?

The actual sound design in the game was done by Criterion, who are part of EA, but I was supplying many sound design elements in the early stages of development, but for the soundtrack I wanted to create my own weather sounds, for example on Engulfed By The Monster , a track that plays when you swim into water and the monster gets you. Of course you can simply selects effects from music sampling library, but I came across an interesting experiment in which someone sculpted white noise into sea and storm sounds. These sounds also come with a nice, rumbly, unsettling effects. On various tracks I could create a feeling of a monster surfacing from and diving back into rushing water.

There’s also  music in the game that captures the feeling of relaxation very well, of getting some respite. What elements are crucial to creating that atmosphere?

A lot of what makes a track sound "happy" is in the instrumentation. I used textures that had a positive vibe to them which I created using different synthesizers. A lot of it is ambient-orientated, lush, quite slow-moving. I stay away from rhythmic elements or beats, as that would focus too much of the player’s attention on the music. A notable exception would be the track Discover The Past, where Kay comes across the marketplace at which her parents first met, as there she is supported by a group of very upbeat little helpers.

When you work with synths, is that to aid the relaxing atmosphere or is it more of a personal preference?

I don’t want to make "relaxation music", you want to keep players going after all, but I want to develop multi-layered tracks, whether that be in regards to chords or textures, and synths always lend themselves very well to that. I’m also fascinated by filed recordings and natural sounds, there’s really just always more to a track than "just" the instruments, which ends up adding a lot of depth to music and gives you interesting things to discover as you listen to it.

How important is it to you to use real instruments?

It’s perhaps one of my favourite things, working with musicians, watching them excel at their instruments, is so exciting, but the organic sound of a string quartet for example is unmatched, and these parts are usually the parts listeners develop a really strong connection to as well. On my twitter (@guyjacksonmusic) you can find the album’s sleeve notes because it’s important to me to introduce the audience to these fantastic musicians and singers to give them the credit they deserve.

There’s a few tracks you use voices on, making it feel like a very deliberate decision. In what way did you use singers on your soundtrack?

Basically the voices represent characters. On Sunny’s Theme, the track for your main character’s younger brother, I got the singer Laura James to sing in a style reminiscent of a very young boy, Cornelia and Boris actually fell for it. On Kay’s own theme I actually wanted to create the feeling that it was sung by her mother. Ella Hohnen-Ford has just that type of motherly timbre.

I noticed quite an unusual instrument on one track, or at least a surprisingly prominent one—the track Lonely Dark Shadows features a bassoon?!

Yes! I love the bassoon and I feel like it gets lost in orchestras. It’s a very emotional instruments, too—many composers use violins or cellos because string instruments, especially with slow, lingering bowing, have a strongly emotional quality to them. The bassoon, played on this track by the wonderful Alex Callanan, is quite an emotional instrument, too, and it had something fatherly to it, which again would come to represent a character in the game. I’m really happy I got to showcase an instrument I love in that way.