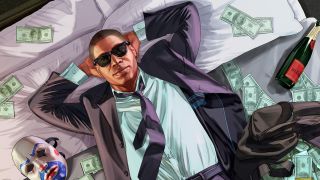 Take-Two Interactive announced today that Grand Theft Auto 5 is the best-selling game of the past decade, according to the NPD Group, while Red Dead Redemption 2 is the best-selling game of the past four years. If any of that sounds familiar, it could be because we mentioned it a couple of weeks ago: Activision owned the decade with Call of Duty, but it couldn't unseat GTA5 at the top.

"Together, both award-winning titles have attained incredible benchmarks for Rockstar Games, with collective lifetime sell-in of Grand Theft Auto 5 and Red Dead Redemption 2 now totaling more than 150 million units worldwide," Take-Two said in a statement. "Rockstar Games’ total online audience is now its biggest ever, having recorded its largest numbers ever throughout the fourth quarter of calendar 2019."

I'm bringing this up again because good news for Rockstar means good news for you, assuming you're a GTA Online and/or Red Dead Online player. To celebrate the big numbers, Take-Two is giving away some pretty hefty bonuses in both games: GTA Online players will earn GTA$1 million for playing between January 30 and February 5, and another $GTA 1 million for playing between February 5 and February 12. Just show up and it's yours.

GTA5 and RDR2 aren't just huge successes in terms of units sold: Rockstar also said that despite having been out for well over six years (not quite five on PC), the GTA Online player base is still growing.

"After breaking records for daily, weekly and monthly average players in July and August consecutively following the release of The Diamond Casino & Resort, the December launch of The Diamond Casino Heist broke even those records, bringing players back in bigger numbers than ever before over the holiday period. The back-to-back release of these two colossal updates—the biggest GTA Online has ever seen—also made December 2019 our largest month ever in terms of player numbers," it said.

"With two distinct worlds now alive and thriving, we are very fortunate to have such a dedicated fanbase that travels with us on this journey as both continue to expand and evolve with new types of gameplay, new stories and much more to experience over the coming year."

Those plans include the addition of a new open-wheel racing series in GTA Online, and the expansion of Red Dead Online's Frontier Pursuits with "additional roles, new missions and many more significant updates to come." Maybe if we're lucky, we'll see some of Chris' recent suggestions actually make it into the game.