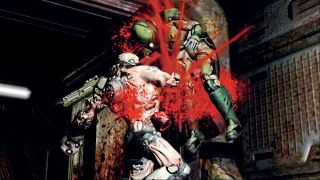 This series originally ran in PC Gamer UK magazine as a column called They're Back, in which Jon Blyth took a sideways look at ageing games and re-releases before meting out judgement.

This week's edition was first published in November 2011, which is why it talks a lot about physical re-releases and bundles and other things that don't exist any more.

More old-school than its few short years can justify. And the Strogg are stupid.

Quake 4 is a game where you shoot Strogg. You shoot them because they are, to coin a phrase, pricks. They don’t just capture enemies, they implant, vivisect, and convert them into a meaty clan of cybermen.

In the case of Matthew Kane—hello, you big protagonist you—they don’t quite finish the job, leaving an enhanced and thoroughly miffed super-marine to bring about their downfall. A lesson for future Strogg scientists: do the brain first.

id Software farmed this one out to Raven, a studio I had to look up to make sure they were still going. Last I’d heard of them was Singularity, a game I could love like a three-legged dog with a nice wonky face. Sadly, Activision didn’t feel the same way, and did the marketing equivalent of bundling Singularity into a sack and throwing it off a bridge. A shame, because Raven are masters of unspectacular success. The crown princes of entertaining adequacy. And they did modern Wolfenstein, but you can’t stay angry forever.

So, Quake 4 is... well, it’s a competent but difficult-to-get- thrilled-about singleplayer game. If you’re after a classic Quake deathmatch, stick to the previous games—Raven certainly did, advancing the brilliant Quake 3 template in only cosmetic ways. Even the singleplayer is defiantly old-school, from medkits and health-out-of-100, to level design that seems immune to modern concepts.

For example, the doors. They drove me nuts. Look, I understand that you’ve got to disguise the corridor. I understand that shooters as linear as Quake 4 need to pull off some smoke and mirrors. But dropping dozens of solid locked doors into your levels isn’t that. Maybe at the first locked door, the player will think ‘oho, I’ll probably be needing a keycard for that. Let’s frisk some dead guys, that’s my favourite.’

Drop the player into a room with eight doors, six of which have those never-to-be-opened red lights either side of them, and the player will begin to suspect that there’s nothing behind those doors at all. They’ll begin to think you’re taking the piss. Why stop at eight? Why not do a room with five-hundred locked doors? You could even label the doors ‘Amazing Town’ and ‘The Infinitely Recursive Glitterverse’. Go nuts! It’s not like you’ll ever have to design them.

That said, Raven do have the knack of making a shooter with an entertaining soul. The weapons are great, and the action more full-pelt than Doom 3’s moody darkness. If there’s one thing Quake has, it’s fun-to-shoot-shit appeal.

Incidentally, while old disc versions get compatibility errors with Windows 7, they actually are compatible, you just have to run the files directly with a right click and a run as admin, instead of relying on the autoruns on the disc.

I should have guessed the Notch seal of approval is no guarantee of accessibility. The three short tutorials are non-interactive macro recordings of mouse movements and pop-up explanations, leaving you with some need for the meticulous 107-page PDF manual. If you’ve ever thought ‘well, all this adrenaline is nice, but I really do admire a good system’, this is RollerCoaster Tycoon without the pretend thrills.

One of the main complaints when the game was released in 2004 was that Sawyer had had a decade to improve on Transport Tycoon—and all he’d done was throw more pixels at it. It’s an accusation that loses its sting seven years on, with both games swathed in the pink mist of retro.

As a game, it’s a fussy bureaucratic girl, with charts and information leaking out of her. There’s a baroque charm to the homebrewed OS, mimicking Windows with its dropdown menus and dismissible panels. But it’s tough to justify this game, when the Deluxe version of its predecessor offers more substance.

Even improved with age, Locomotion is the crappy pistol in Chris Sawyer’s arsenal. Happy genius and lovable cuddlebear Notch may be, but next time he recommends a game on Twitter, I’ll read up on it first.

If the ocean had a deep end, Silent Hunter 5 would throw you in at it. The tutorial and manual don’t even begin to approach the problems you’ll face, making this a game fundamentally unsuitable for anyone who’s not willing to poke around, experiment and spend long painful hours questioning the relationship between their actions and the events on their monitors. True, Silent Hunter 5 opens up more of the sub than SH4, and there’s also a campaign mode, be it ever so slightly inadequate.

The main problem with SH5 was that it was buggy. We’re some versions on now, so AI fixes have helped, and the framerates have been fixed slightly, making this a better prospect than it was at launch.

The talkative grunts in this game have been so well and thoroughly parodied, I can no longer remember whether or not someone in the game actually started telling me about their children just before I shot the support away from a museum exhibit and crushed them to death with it.

But apart from the occasional frustration when your game descends from stylish conflict avoidance to panicked alarm-trigger flailing, Fisher’s immersive and stylised latest is as good as you’ll get in Clancy’s post-hardcore era. While ‘cinematic’ is a default lazy word for game reviews (as are ‘immersive’ and ‘stylised’—I’m going for bingo), the artistic direction of Conviction is begging for it.

You get the game and its four expansions, along with 30 days’ sub. After that, you’ll be shelling out monthly. That’s 30 days to get to grips with a mean-spirited grind against that familiar FF bestiary. Thirty days in a perfectly beautiful world where ‘quests’ and ‘rewards’ take a sad backseat to the repetitious sedation of punching onions. By not offering the constant trickle of progress and payoffs, a charitable player would say that FFXI shows Blizzard up for the cynical brain-prodding wizards they are.

If you’re going to sally forth, you should know that a month isn’t even going to start your journey. This is a universe that’s light on dings, where the gratzes are heartfelt.