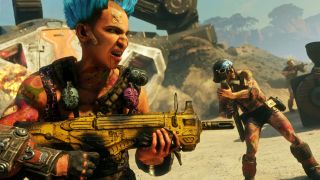 Avalanche, known for wild open world games like Just Cause and Mad Max, is collaborating with id Software, fresh off a Quake game we like and the wonderful Doom 2016, to bring us the post-apocalyptic FPS Rage 2. It's due out in 2019, and here's everything we know about it so far.

Set in the same post-apocalyptic universe as the first Rage, you play as Walker, the wasteland's last remaining ranger. You're here to wipe out the various vicious gangs as well as rid the world of The Authority, the oppressive organisation from the original Rage.

Rage 2 is currently available digitally for pre-order on Bethesda.net, so it appears, like other Bethesda-published games such as Fallout 76, that Rage 2 may not be coming to Steam at all.

Looking a little bit Bulletstorm in a good way and set in an open world, Rage 2's gameplay trailer does show off a more colourful and exciting world than we saw in 2011's original. It's still a little brown, but a lot of those environments are pretty. We're promised everything from jungles to swamps to deserts. That last one is a little obvious, but hey.

And here's 9 minutes of pre-beta footage, too

The video above gives a nice look at some of the weapons, powers, and vehicles we'll get in Rage 2, from a grenade that sucks enemies into a vortex to a ground-pounding power slam attack that does more damage the higher you jump from. The video also shows a boss in a hodge-podge mech suit, and a third-person car ride as well as a jaunt to a marshy region in a hovercraft.

Rage 2's collector's edition includes a talking head voiced by Andrew WK, because this is 2018, baby

Rage 2's collector's edition comes with a bunch of in-game extras, like Doom's BFG, an expansion and other items that'll either excite you or not depending on your mileage for such things. The main draw, though, is a talking head of Rage 2 character Ruckus the Crusher, voiced by Andrew WK. In the US, it'll cost $120 for this version of the game, and Amazon has the UK price down as £100.

If you've ever dreamed of Andrew WK being your best friend (particularly after reading his Village Voice advice columns in 2015), this is probably as good as it's going to get for now. Either that, or it'll horrify you and you won't want it in your house. Whatever suits your lifestyle.

Rage 2 has no multiplayer

Rage 2 is a gigantic, single-player-only open world game, so if you were hoping to jump in a car with some pals and open fire on vaguely punk-styled NPCs together, it isn't going to happen. As Avalanche's Magnus Nedfors told Eurogamer, "We're just focused on the best open world single-player game that we can make...I personally really believe you can make single player games really fantastic, so that's what we're focused on." Luckily, you won't be short of co-op shooters, based on the announcements at E3 2018.

Here's how driving and shooting works in Rage 2

The Rage 2 E3 reveal made a big deal about the fact that if you can see it, you can drive it. This includes cars, and larger vehicles like monster trucks, but also gyrocopters. The wingstick from Rage reappears as a weapon in your arsenal.

You've got Nanotrite powers in this one, too, special abilities that make the combat look a bit more visually exciting than a standard FPS. Overdrive, meanwhile, lets you overpower your guns to make them even more effective in a firefight. In terms of enemies, expect to encounter "madmen, mutants and monsters" in Bethesda's words. They call it a 'Shooterverse', but we couldn't do that, just in case we're forced to look our English teachers in the eye again someday.

We've played a bit and here's what we think so far

We've gotten our hands on a few slices of Rage 2 already. Phil enjoyed the id-quality shooting but wishes the world had a bit more personality. "While basic combat is entertaining—always a positive for an FPS—I don't yet have a sense of how varied the open world will prove," Phil said. "There are plenty of icons to explore, but some felt more like padding, and the vehicular combat encounters I stumbled into on my travels seemed basic and repetitive."

Chris also got to try Rage 2 at QuakeCon, enjoying some of the nanotrite powers but coming away unimpressed by the wingstick, the game's guided boomerang. "Maybe it's from seeing all the footage of God of War 4 this year, with Kratos chucking around that devastatingly awesome axe of his, but I sorta feel like the bar for throwable bladed weapons has been raised a few hundred feet," he said.

"From now on in games when you throw something big and sharp it's going to be compared to that axe, and I didn't get any kind of badass feeling from using the wingstick. It works, but it's just not as satisfying as rushing up and splattering someone with a nanotrite-fueled melee attack."