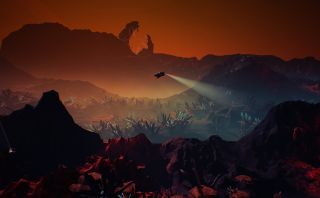 I've managed to remain largely in the dark about The Long Journey Home until now, save for the knowledge that PC Gamer contributor Richard Cobbett is writing it, and that it looks like this generation's Star Control. You probably know Daedalic Entertainment for its sumptuously illustrated adventure games—The Whispered World, Memoria et al—but this first from Daedalic Studio West is instead a procedurally jumbled roleplaying adventure set in an "endlessly shifting" universe.

We liked the look of the game back in March of last year, but now The Long Journey Home has begun, which is to say it's out now. Here it is on GOG, and on Steam. Oh and here's the launch trailer, which was actually uploaded on the day the game came out. Weird.

The premise is reminiscent of Star Trek: Voyager, in that you begin the game stranded on the wrong side of the universe, having to manoeuvre all manner of environmental hazards, ethical quandaries, and improbably shaped aliens on your dangerous journey back to Earth. Much like our own, probably, that universe is procedurally generated, so you won't have to repeat your adventure exactly when you inevitably croak in the cold expanse of space.

Here's a bit more, from the game description:

"The Long Journey Home combines the endless freedom of space with a new open questing system that always leaves you in command. Deliver the stranded Glukkt to his homeworld as he asks, or to your new slaver friends? Attempt to make allies with everyone, or pin your hopes on the tougher races, and hope they never turn on you? Jump by jump, make hard decisions and live with the consequences, in a universe that is never the same twice."

There's a 10% launch discount, on both GOG and Steam, that ends on June 6.