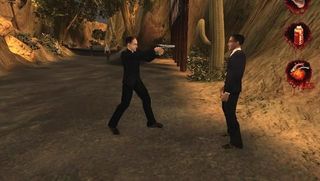 Postal 2 is a notoriously bad game. As Computer Gaming World put it back in 2003, "until someone boxes up syphilis and tries to sell it at retail, Postal 2 is the worst product ever foisted upon consumers." But at least one other site took a different perspective: PC Gamer rated it 71% on the strength of its ambitions and ideas, although we noted at the same time that it's amateurish, sophomoric, indefensible, in bad taste, and "really not very good at all."

Confused? Me too, to be honest. But if your confusion is leavened with curiosity, GOG can help sort it out. Until 9 am PT on December 18, Postal 2 is free for the taking as part of GOG's ongoing Winter Sale. You'll need to scroll down the front page a bit to find it—once you do, just mash that "get it free" button and it'll be automatically added to your account.

Postal 2 is a very bad game, but it's also interesting as a historical curiosity. It will never not be tasteless, but the level of wanton, kill-'em-all violence that used to cause shocked gasps and wrung hands is now pretty much par for the course. It makes me think of the twin-stick shooter Hatred, which was released in 2015: It too was violent and tasteless, and not especially good, but the biggest controversy surrounding its launch was its removal from Steam Greenlight, a decision which was quickly reversed by Valve.

Despite its craptastic notoriety (which developer Running With Scissors has embraced), another sequel is on the way. Postal 4: No Regerts was announced and released in October in early access on GOG and Steam.