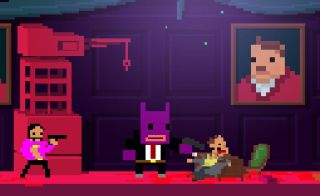 We came upon Not a Hero in a bit of an unusual way, when developer Roll7 added Curiosity winner Bryan Henderson to the cast as a sort of consolation prize for getting stiffed (so far) on his Godus reward. Now we can take a closer look at the game itself, thanks to a trailer that opens with "reasonable force, used unreasonably," and then steps it up from there.

The trailer is wildly violent, but it's offset by its fundamental silliness, which comes through both the pixel art style and the game's leading characters: an anthropomorphic rabbit from the future named BunnyLord who's running for mayor on a promise to clean up the city, and Steve, a former professional assassin who's now working as his campaign manager.

A new Not a Hero website is now up at www.notahe.ro, and the release date has been revealed as well. "The Roll7 team really wanted to embrace the indie developer lifestyle by delaying the release of Not a Hero on several occasions for no discernible reason," Creative Director John Ribbins said. "Unfortunately, we also have a publisher, so we have to stop messing around and release it. So, May 7 I guess."

Prior to that, the beta version of Not a Hero will be playable at PAX East, SXSW Gaming, and Rezzed.