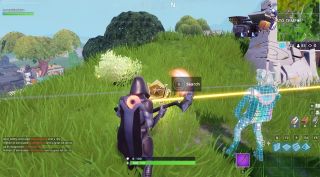 You'd have thought that Netflix's biggest competitors would consist of other broadcasting companies—such as HBO or Amazon Video—but it turns out that Epic Games' Fortnite gives Netflix execs more cause for concern.

The surprising news came in a letter that was included with Netflix's Q4 results (thanks GI.biz) and pointed out that competition for screen time is not limited to other broadcasting companies. Just yesterday, we reported that Fortnite earned $2.4 billion in 2018 and it seems that the game's success has the capacity to affect the popular streaming service.

From Netflix: "We compete with (and lose to) Fortnite more than HBO. There are thousands of competitors in this highly fragmented market vying to entertain consumers... Our growth is based on how good our experience is, compared to all the other screen time experiences from which consumers choose."

While successful games may pull potential viewers away from Netflix, the reverse is arguably true too, though admittedly on a smaller scale. Some developers are not going to want to launch a game on the same day a huge series lands on Netflix. Sure, if you've got the time to binge-watch a series, the effect would only be temporary, but if the majority of players were to choose Netflix over a newly launched game, then it's possible that could impact sales to some degree.

The war is on for your spare time.