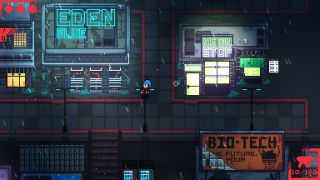 Want to run a glowing gun store in the future? Like Recettear and Moonlighter, Neon Blight is split between shop management and action-RPG adventures. To get new stock to sell to gun nuts, you need to go out and find guns, most of them seemingly from the corpses of fallen enemies.

It’s in early development, but you can download the alpha from Itch.io. There’s not much to it right now, though. The shop management stuff isn’t present and the town only has one NPC, but you can head out into the forest and relentlessly murder people with guns. The forest is an odd setting that doesn’t exactly scream cyberpunk. That said, maybe the genre needs a bit more greenery.

The forest contains a shop where you can get new guns and test them out. Pretty quickly, you and your enemies will fill the place with bullets, spraying them out of comically over-sized weapons. There’s the hint of a bullet hell shooter, and I’m looking forward to seeing what sort of chaos the randomly generated guns will cause in the full game.

It's not clear how the roguelike elements are going to interact with the management stuff. In the current build, death just unceremoniously kicks you back to the menu, but you also don't have much to lose. Hardcore permadeath and management don't immediately seem like a comfortable fit. Moonlighter made it work by making the consequences for death less brutal—you lose all of your items—so maybe we'll see the same here, once the shop opens its doors.