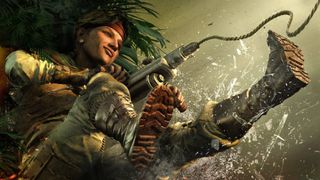 My PC currently houses an old 250GB SSD, which isn't nearly big enough to hold Windows plus all my games, so a few months ago I installed Rainbow Six Siege on my hard drive. I did not know at the time that my innocent, normal decision meant I'd be roasted before every other goddamn match.

Siege requires all players to load the map before a round can start, and rather than just pasting a generic message on the screen like "players are still loading," it shows exactly who's holding everyone up—for instance, me. It's a snitch!

I complained about this loading screen bullying in our work chat and then got bullied even more by Jarred, whose exact words were: "Shame on you HDD users! A 1TB SSD only costs $100 now. Go upgrade!"

Fine! You've got me! I'll upgrade so that Siege players stop calling my PC a potato!

Jarred isn't wrong. You can get our current favorite SSD, the Crucial P1 1TB NVMe, for $100, and the older and slower Crucial MX500 1TB (a SATA drive that will work in any PC) is just slightly pricier. He recently wrote that HDDs are dead to him because SSD prices have gotten so much better. They might be extra cheap come Black Friday, as well.

I'm still mad that I have to spend $100 so that I can stop cringing at a spinning circle while people spam "SSD" at me. Maybe I just like going at a slower pace! Maybe I want to savor the chit chat with my friends before we go into Tactical Voice Chat Mode! The biohazard container isn't going anywhere. It will still need protecting 10 seconds after everyone else has loaded.

But fine. I'll get another SSD. You've won, Jarred and Siege players. I hope you feel good about making me load things faster. Once my new drive arrives, every quickly-disappearing loading screen will reek of coercion to me.