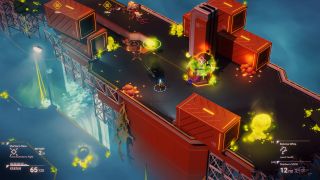 Crash-landed on an alien world lately? No? Well, that’s convenient, because Beacon has gotten a lot of new guns and weird body parts recently. Beacon is a gorgeous sci-fi shooter with a stylish aesthetic that can’t be beat. In the last week Beacon got its big 2.5 “Pathfinder” update, bringing the game to its Early Access content close in preparation for launch later this year. With this update, Beacon now has 100 weapons and I can assure you that they are all extremely fun and good except for the flare gun. I get killed every time I pick it up so I can only assume it is the flare gun's fault and not mine. The Pathfinder update also overhauled the game's pickup items, adding neat new passive pickups if you’re bad and forget to use the active ones. (Like me.)

In Beacon, you collect DNA from your enemies as you kill them, then use that DNA to modify yourself with new statistics, powers, and abilities in your next run at the game. You can build a lot of cool high risk, high reward setups. I'm a big fan of giving myself as much speed as possible at the expense of literally everything else. The last update, 2.4, added a boatload of new enemies to the game as well.

We first heard about Beacon back in 2016, then caught up with it in 2018 when it launched on itch. Beacon is available on Steam and Itch.io for $20 and is set to fully release later this year. You can check out Beacon’s gorgeous website here.