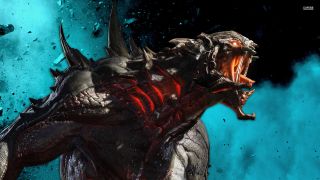 Evolve has gone gold, which is a nice but not particularly important bit of news, since we already know that it's coming out on February 10. Turtle Rock is also marking the moment by releasing the intro cinematic, and more significantly, joining with publisher 2K Games to kick in nearly $23,000 to Child's Play.

Back in January 2014, members of Turtle Rock made the "No Shave 'Til Ship" pledge: No shaving of beards for the men, and no cutting of hair for the women, until Evolve passed certification. The studio promised to donate $50 to Child's Play for each inch of hair grown and cut, and with 227.5 "hairy inches" produced between now and then, it adds up to a very impressive purse of $11,375. 2K agreed to match that amount, taking the total donation to $22,750.

Turtle Rock said it will now focus on the upcoming open beta, which unfortunately is exclusive to the Xbox One, although some PC players will be able to take part in a smaller "closed technical test" beginning on January 16. After that, work on the planned DLC will resume.

The opening cinematic, meanwhile, is about what you'd expect—four hunters, one monster, lots of pyrotechnics—but even though it's not terribly surprising, it is a handy reminder: If your plan to subdue a 30-foot-tall fire-breathing monster is to stroll up and give it the stink-eye, you really need to come up with a better plan.