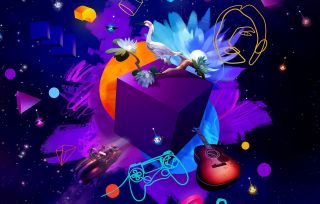 If there's one PlayStation exclusive that deserves to come to PC, it's Dreams. It's part game and part platform to create whatever you want. Some folks make games while others make characters, mechanics, music or even films. The only downside is that everything created in Dreams is trapped on the PS4.

Speaking to GameIndustry.biz at the View Conference 2019, Media Molecule co-founder and art director Kareem Ettouney said that a PC version is part of the plan for Dreams. Though, we probably shouldn't be holding our breath for it anytime soon.

"The answer to every question is 'yes', but Dreams needs to reach a lot of people first," he said. "Our goal for Dreams is to last for 20 years, and keep expanding it and keep adding to it and keep improving it. But most of the PlayStation model is designed for a game to come out, it hits the market, and it makes most of its returns in the first week, you know? If it's a big game, it survives for maybe two or three sequels.

"We need to reach [an audience] and then grow. But it's definitely in our dreams to do Pro versions that are expanded. It just depends on a lot of things working out for us."

That's not as exact as we'd prefer, but it makes sense considering how long term Media Molecule's plans are for Dreams. There are no guarantees, but if Dreams gets to where it needs to be, it will eventually expand onto PC and beyond.

After almost a year in early access on PS4, the full version of Dreams is releasing February 14. The full release will come with the single-player stories Media Molecule has been teasing for years, all of which are made using the same exact tools given to players.

The pace of new additions to Dreams could inform how long we can expect to wait before it releases on PC. The game currently receives big patches every few months. With development on the single-player content wrapping up, we might see faster turnarounds on future updates.

Media Molecule also plans to give creators the ability to export their Dreams projects to other platforms. "The very limited exporting features the moment are like exporting a video, but we have in the long-term [plans for] exporting a standalone game outside of Dreams entirely—exporting to other devices and beyond," said Etounney.

That's very exciting. Dreams is an incredible creation tool, but it's a bummer that all of its creations are trapped inside Dreams itself. Right now, that's a part of the deal that creators accept. But it'd be amazing to someday export a game or song as a standalone thing.

A Dreams commercial license is in the works

Imagine exporting your Dreams game as a standalone app and being able to sell it? One day, that'll apparently be possible. In the same GameIndustry.biz interview, Etounney said that the studio is looking into commercial licenses for Dreams. Media Etounnney wants everything you make in Dreams to be yours.

"People in the Dreams community have already been using it to make graphic design, album covers and stuff like that. Using it for their portfolios and showreels," he said. Using Dreams for commercial purposes will likely make more sense once the tools are more accessible on PC, but it's encouraging to know that Sony and Media Molecule are embracing creator ownership in Dreams.

Check out this cool Kaiju game, for instance. Or this Cyberpunk PlayStation 1 demake, or this puppet show made by a professional animator. Or my personal favorite, this high-quality recreation of the shooting mechanics in Receiver that other creators can import into their own games. Because the world needs more Receiver-likes.

How will Dreams control on PC?

Dreams on PS4 functions by essentially turning your controller into a mouse cursor (represented by your imp). The camera control is handled with the analog sticks. I can see a similar setup working well with mouse and keyboard.

Though, to many dreams creators, the controller is only half of their toolset. When it comes to fine details, many hook up two Move controllers. The main advantage of the Moves is the addition of depth control, letting you "reach" into the screen and sculpt.

The Move control scheme can't really be mapped to mouse and keyboard, but it could work in VR. PSVR support for Dreams is already in the works, so it's likely that an eventual PC version would support VR or AR and enable the same refined sculpting.

I made him in an hour one day. He's a walking broom (based on the one in my kitchen) with eyes and teeth. He can walk, but he leaves dust balls everywhere he goes. Keep away from his mouth—he bites.