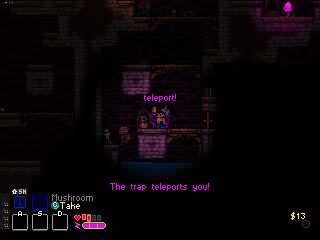 Really quite good platforming roguelike Catacomb Kids has been making do with just two character classes since it appeared on Early Access a few months ago, so it's about time developers FourbitFriday added another one. They've done just that, obviously, supplementing its Poet and Bully classes with the Wanderer (basically the game's agile hunter class, capable of tracking enemies and using a sort of detective mode to scan the environment). Catacomb Kids is also 20% off on Steam, Itch.io and Humble Bundle (though the discount isn't live there yet) for the next week.

Update 0.0.10 (man, it sounds like there's a long way to go yet) also promises "more deadliness", "better level generation", peg legs, vicious dog enemies and more. My copy of the game has just been automagically updated on Steam, so there's your confirmation that the update has hit. I've had a quick go, and I like the cut of the Wanderer's vision-mode-having jib.

You can read the full patch notes for the update here.