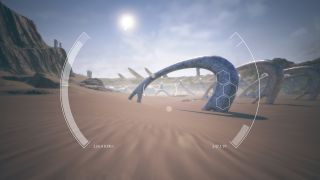 The premise for Breached, which describes itself as a "story-driven sci-fi adventure", is an incredibly familiar one. Yo play Corus Valott, who's awoken from a long period of suspended animation to discover that the world lies in ruins. You don't know why—but you're going to find out. On its own, it's not the sort of bold new idea that's likely to set anyone's imagination aflame, but the gameplay trailer is something entirely more promising.

The description of Breached on Steam is vague, yet alluring: As Corus, you'll “pilot his mind” through his journal in order to make sense of the past, and use drones to scavenge desolate locations for the resources you need to repair your ruined shelter. And you'll need to do it will within eight days, because after that your oxygen supply will run out and you will die.

The website at breached-game.com doesn't reveal much more about what's in store, except that it's set in the year 2245. And it doesn't sound like a happy ending is guaranteed: Beyond the basics of survival, your goal is "uncovering – or perhaps avoiding – the uncomfortable truth of what has transpired." That's an ominous bit of foreshadowing right there.

There's currently no price for the game, nor is there a solid release date, but it's expected to be ready to go sometime in May.