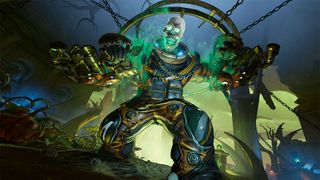 October is only ten days away, and that means that spooky in-game events will soon be slithering into every other online game you play. Borderlands 3 is one of them: The first limited time in-game event will be called Bloody Harvest and will bring with it a new mission, a new debuff, and of course new guns.

Borderlands 3's creative director Paul Sage joined the new monthly Borderlands 3 show to talk about upcoming hotfixes and the event. You can check out the entire show below, though we've jumped the time stamp ahead to the Bloody Harvest section.

To save you some time, here's the Shift Code for a golden key given away later in the show: CHKB3-FJT9J-SK3K5-T33JJ-95J56. This one will remain active for about a week, Sage says. (For more, check out our running list of Borderlands 3 Shift codes.)

The free Bloody Harvest event will be available for all Borderlands 3 players who have left Pandora for the first time and have access to Sanctuary III. A Saurian named Maurice will show up in Sanctuary as the new guide to seasonal events in Borderlands 3.

In the new event mission you'll run into haunted enemies who apply the debuff "terror," which will partially impair your vision and affect your ability to aim properly. There will also be new "anointed" attachments which turns the effects of terror in your favor instead of making you run for the hills.

Along with other new haunted and ghostly enemies, you'll encounter a boss named Captain Haunt whose combat tactics will play into the new terror debuff.

Bloody Harvest will drop in "late October," according to Sage. We're all going to Heck, apparently, because that is the for-real name of the new Bloody Harvest area.