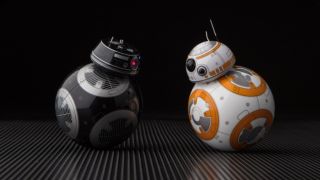 In December, Electronic Arts said that the Weeble-esque droid BB-8 and his bad-guy counterpart would, for some reason, be coming to Star Wars Battlefront 2 as a playable character. In a Community Transmission update posted today, the developers revealed more about what players can look forward to from their arrival (after a slight delay), and also that the game will be returning to the original trilogy in February with the Age of Rebellion.

BB-8, "known for his courage" (it's a machine), will be an offensive hero, helping to balance out the currently supported-oriented Light Side lineup. It's notable first and foremost for speed: The droid moves faster and captures Command Posts more quickly than most other characters. BB-8 wields a Shock Prod that does damage over time to enemies hit with it, and also has a "Cable Spin" ability, in which it extends three tow cables while rotating rapidly, doing "high damage" to all enemies within range. The Rolling Charge ability enables it to rush enemies and damage and push them with its head, and the Resistance Backing ability reveals enemies around BB-8, and also causes them to take slightly increased damage.

BB-9E, the BB-8's First Order doppelgänger (you can tell it's bad because it's black) is a "cold, calculating" (it's a machine) support hero. Like BB-8, it also packs a Shock Prod, and can lay down smoke screens, deploy a Charge Up ability that puts all nearby friendly blasters into "super success mode," and use Shock Spin to spin and release an electric pulse that pushes and damages nearby enemies. BB-9E is also a fast mover, and periodically regenerates the health of nearby friendly characters.

The update will also see the Age of Resistance brought to the Supremacy game mode, and the addition of two new capital ships, the MC85 Star Cruiser and Resurgent-class Star Destroyer. The Era Select menu will also be expanded to include Supremacy, Auto Players—the bots in co-op, Capital Supremacy, and Instant Action modes—will be improved and have the ability to play as Droidekas on all planets and in all modes that support them, and various quality of life changes have been made.

The BB Update was supposed to go live yesterday, but a last-minute "critical issue" resulted in it being delayed until February 3. Beyond that, EA also talked about the upcoming Age of Rebellion, which will see Capital Supremacy renamed to simply Supremacy, "to encompass all eras as the upcoming Original Trilogy variant will be fought exclusively on the ground." The Star Wars Battlefront planet Scarif, "one of the most highly requested planets," will also be added to Battlefront 2 in Age of Rebellion. Full details will be revealed later in February.