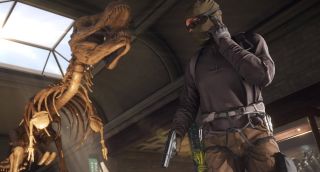 Electronic Arts has announced that the next expansion to Battlefield Hardline will be called Robbery. It will include four "expansive" new maps—The Docks, Break Pointe, Museum, and Precinct 7—and a five-on-five mode called Squad Heist, which is being billed as an homage to Battlefield 4's Squad Rush.

Squad Heist will unfold over three distinct stages: Grab a drill, break into a vault, steal the loot, do it again at a second vault, then haul ass to the exit point and fly to freedom on a helicopter. The police, naturally, need to ensure none of that happens.

"Obviously, this will all be themed to the map. You might have to take the Glass Cutter (Drill) and steal the Blue Diamond (Loot) from the Display Case (Vault)—but the basic idea stays the same," EA explained. "At each stage, criminals get 25 deploy tickets. If those tickets are all lost, the cops win the match."

The Robbery expansion will also have four new weapons, two gadgets, two factional vehicles and vehicle upgrades, new camos and vehicle paints, and the "Legendary Super Feature." That last bit sounds potentially very interesting, what with it being legendary and super, but unfortunately I can't tell you what it is because, to be blunt, I have no idea. I've emailed EA for clarification on that point, and we'll let you know if and when I hear anything back.

Thus far EA hasn't put out a Robbery "reveal video," as it did with the Criminal Activity DLC in May, but we do have this image of three ne'er-do-wells about to be arrested by the dinopolice, and that's not nothing. Battlefield Hardline: Robbery will be out in September.