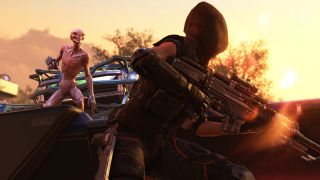 Preorder bonuses are standard fare these days, and XCOM 2 will be no exception. 2K has announced that gamers who lay down their money up front will be given the Resistance Warrior Pack, with extra customization options and a new "Survivor of the Old War" recruit, at no extra charge. It also unveiled a season pass that will add three themed DLC packs to the game is also available, and there's a new trailer, too.

The season pass, called the Reinforcement Pack, will include the "rebellion-themed" Anarchy's Children, which will add more "dramatic" soldier customizations; Alien Hunters, with yet more customization options, more powerful weapons and armor, a new mission; and Shen's Last Gift, featuring an all-new class of soldier with unique weapons and armor, and an additional "narrative-driven mission and map." Anarchy's Children is slated to come out in the spring of 2016, while Alien Hunters and Shen's Last Gift will follow in the summer.

The Reinforcement Pack is available for separate purchase for $20, and the packs within them "may be" offered individually as well, although at a higher price than they'd be if purchased in the pack. It can also be had as part of the XCOM 2 Digital Deluxe Edition, which goes for $75, compared to $60 for the standard release. Both are now up available to prepurchase on Steam.

It's been a wild time for XCOM 2: The system requirements went out yesterday (you won't need a super-high-end PC to play it), and we also have a good hands-on preview you can dig into here. XCOM 2 comes out on February 5.