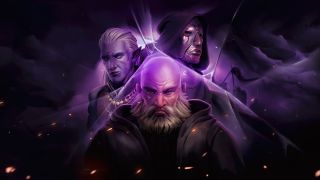 Imagine you're a fantasy adventurer with all the physical attributes you actually have right now. Would you be able to slay a pack of rabid wolves and murder a camp of bandits? Or would you get smacked in the head once by a drunk guy in the forest, collapse into a heap of snot and blood, and cry until you blacked out? That's Stoneshard.

I'm exaggerating a little. You can take more than just one blow in Stoneshard, but if two bandits get within striking range of your organs, your chances of survival are low—at least with a level 1 character. And even if I limp away from a fight, I can be broken in many ways. If a body part is wounded, it needs to be set with a splint (this applies to your head, too, which sounds uncomfortable) or the pain can become unmanageable. Too much pain not only damages your stats, it can kill you if you go into pain shock. Wounds and pain and other afflictions also lower your max hitpoints.

Here's how I'm doing one evening after I scamper back to town following a run-in with wolves and bandits in the woods: My left leg is injured, my right hand is injured, I'm suffering from extreme pain, I'm confused, and I'm close to fatal intoxication from a mystery dust I ingested hoping to lessen the pain. I'm also hungry.

I don't have much money, and even if I were rolling in crowns, the town herbalist is out of splints. I attach some leeches to my leg, which is a mistake: While they have healing properties (Stoneshard takes medieval medicine at face value), leeches increase my pain, as you'd expect. I stumble to the market—my confusion causes me to move to a random adjacent square on the grid now and then—and buy a tomato. I eat it. This does not help.

I spend my last 30 crowns for a room in the inn. My wounds might heal a bit if I can sleep, I figure, and it saves my progress. But the pain has turned to shock and I can't sleep with a potentially fatal condition. My only choice is to wait and hope I don't die. I press space repeatedly to advance turns, my max health and current health fluctuating with each tick. At one point I have five hit points and I'm sure I'll die. I hit space again.

My pain shock downgrades to merely severe pain, and I click on the bed and fall unconscious for 10 hours. When I wake up, I'm still hurting, but I have no choice but to wander back into the woods to make the 30 crowns I need for another night's sleep.

If you like making consistent, smooth progress, look elsewhere. Stoneshard's prologue alone took me several attempts to complete, and once it let me loose in its fantasy wilds, death came frequently.

At least in the early going, Stoneshard frequently feels hopeless. My squishy sorceresses' fire bolts and rays aren't always enough to keep the hordes of bald angry dudes and wolves at bay. If they get in close, I have to hope I succeed on dodge chances or score a critical hit to put them down. Bad rolls mean instant death. She feels like one member of a missing party that should be there to tank and heal for her.

It's something like playing D&D with a stickler of a dungeon master who makes you describe every step you take, and also hates you. You don't just get to 'go back to town' after clearing a tough dungeon: Every square you touch on the way back is another opportunity to hurt, maim, or kill you.

Eventually I gave up on sorcery and started again with a new character, choosing a roguish guy who specializes in bows and daggers (custom characters aren't available yet). Combat's easier with him. He can pelt enemies with arrows and then use a passive ability to switch to his dagger without losing a turn and slice guys up. But on my way back from a successful dungeon raid, I stepped on a trap. No big deal, just a wounded leg. I applied a splint, and then a bandage, and then the trap went off again because I hadn't disarmed it or moved off of its square and I died. Alright, that one was my fault, but still: shit.

Walking back to town to sell my trinkets and save by sleeping in the inn is tedious, but it's far worse to die and have to redo the day's work: Speaking to the town elder again to claim a contract, buying provisions from shopkeepers, and trudging back into wolf-infested woods. Part of me wants to flip the table over and give up, but the random generation (maybe it'll go better this time!) and the sense that I'm probably just making mistakes or missing something about its complex systems keeps me coming back.

I still haven't yet cataloged all of Stoneshard's stats, possible buffs and debuffs, and skill trees, which require finding and studying books to unlock. There are standard martial and magic paths, as well as all kinds of currently unavailable trees for medicine, alchemy, survival, and so on. Watching the developer play on a stream, they seem unstoppable as they down enemies and munch on herbs (I should really be buying more herbs).

The clockwork world is cute. Shopkeepers go home in the evening and return to their vegetable carts in the morning, and off-duty guards can be found snoozing in the barracks. Outside of town, the corpses of brigands I slayed yesterday are pecked at by birds. I get the sense that hundreds of things are happening every time I click an empty space to take a step. During this Early Access phase, which is planned to take more than a year, more systems such as cooking and crafting are on the way, as well as a complete story.

As it is, there's a light narrative about an old mercenary who gets in over his head and calls in a favor from you, a pluckier sellsword. The dialogue is written in a confident voice, though it all happens in a typical medieval fantasy land where villagers are frequently kidnapped by bandits and the town drunk sleeps in a barn—I haven't been charmed by its mysteries as of yet. What makes Stoneshard exciting is its commitment to simulation. The gears spin however they will, without any care for who gets sliced, crushed, or impaled by them. I could just use a break from the mortal danger here and there.