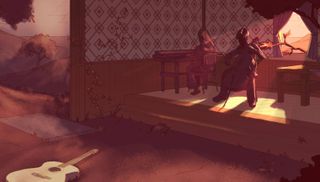 To the Moon, the retro-style adventure about a pair of doctors who travel through a dying patient's memories in order to fulfill his last wish, has an “overwhelmingly positive” response on Steam from a pool of more than 19,000 user reviews. The self-contained mini-adventure A Bird Story, meant to bridge the gap between To the Moon and its upcoming sequel, didn't fare so well in our estimation. That sequel, called Finding Paradise, will hopefully be more like the former than the latter, but we won't find out for quite awhile yet. Creator Kan Gao has just released a teaser showcasing some screens and a piece of music from the new game, and also a very loosely-estimated release target that's a year away.

Finding Paradise will be much like its predecessor, telling “a standalone story following two doctors as they traverse a dying patient's memories to artificially fulfill their last wish.” The patient this time is Colin, the now-grown boy from A Bird Story, although Gao emphasized that this is a standalone story, so playing either of the previous games won't be required to enjoy (or make sense of) the sequel.

Maybe it's my expectations and prejudice speaking, but there's a certain melancholy ambiance to the teaser: A life lived, choices made, and regrets endured, all seen through the filter of a memory fading to oblivion. And then I wonder, is a dying wish that's realized only in the mind really fulfilled at all? What is experience? What is a life lived? If we “know” we've done something—if we can remember it, and feel it—then is that moment truly ours? And if not, then what really is its value?

It's possible that I put too much thought into this.

The bad news for those looking forward to Finding Paradise is that the trailer concludes with an estimated release target of “end of 2016/early 2017.” Hopefully it will be the former, but as Gao said, "given how my past release schedules have been, it's probably gonna be early 2017 instead."