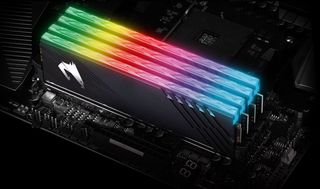 Gigabyte has added an interesting feature to its newest Aorus RGB memory kit, one that allows it to run faster in certain motherboards with minimal fuss. It's called "Aorus Boost," and it gives users up to a 4 percent bump in performance.

It's the boost feature that is somewhat interesting, though.

This is where Aorus Boost comes into play. On certain Aorus X570 and Z390 motherboards, there is an Aorus Memory Boost setting in the BIOS that will apply the necessary settings to increase the frequency up to 3733MHz. Compatible motherboards include the following models:

It's not clear what effect this has on timings; I presume they get loosened a touch. Outside of the boost feature, Gigabyte says this kit is built on a "10-layer, sophisticated PCG that ensures the stability and performance" of the memory chips, which are "100 percent sorted and tested." Binning is a common practice on the best RAM kits, though, so this is not unique to Gigabyte.

There are two versions of this kit available. Both sport a pair of 8GB modules, but the second version also includes a couple of "demo modules." These are dummy modules for people who want to fill all their DIMM slots with RGB lighting, without buying more RAM.

Gigabyte did not say when this RAM will be available or how much the two versions will cost. As a point of reference, Gigabyte's Aorus RGB 16GB DDR4-3200 memory kit with demo modules sell for $169.99 on Amazon.

That said, if you are in the market for RAM (or pretty much anything else), it might be worth waiting a week to see what of Black Friday deals emerge.